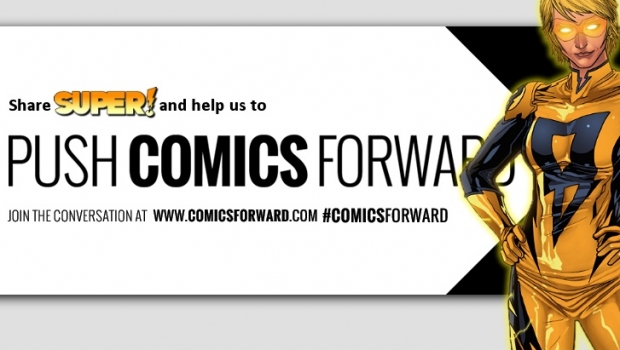 From the desk of Super! co-creator Justin Piatt comes the following: 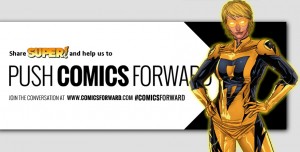 This week, Boom Studios launched Push #ComicsForward, a Twitter hashtag conversation and blog page with two aims. “It’s about promoting more gender diversity, racial diversity, and LGBT diversity, as a start.” said Boom’s Editor and Chief Matt Gagnon. Beyond that, the initiative seeks to applaud studios and creators who have broken the established mold of storytelling.

Today, fresh voices entered that conversation; the artists-turned-publishers who created the superhero comic Super! – an off-the-radar superhero comic that was amongst the highest critically rated superhero comics in the country, partly because it coincided with the core values of Boom’s #ComicsForward initiative – it’s female-fronted without being exploitative, diverse without beating readers across the head with their diversity, and it shamelessly screams “let us give fans what they want” with its balls-to-the-wall action.

Here are 5 ways that comic publishers can continue pushing comics forward in 2015, according to Super! co-creator Justin Piatt.

1)    Comic publishers need to develop relationships with comic book stores independent from Diamond Distributors. Without these relationships, what would protect them, or the industry, were Marvel or DC to pull out from print comics completely?  These relationships with brick-and-mortar comic stores are important because as a creator (Super!) without a publisher, our two main options for avoiding the expensive, high risk/high reward Diamond distribution system cut comic stores out of the picture completely.

By partnering with Comixology Submit, Super! was able to sell our comics directly to fans all over the world, and we were even lucky enough to be chosen for a few of Comixology’s sales, which gave us a load of exposure.

Through Kickstarter, we’ve been able to hook up with new fans and empower our existing fanbase to push Super! to new heights. The 10% fee charged by both Amazon and Kickstarter is much less than what Diamond takes off the top, and it’s lower risk because if your fans and the market don’t rally around your project and it fails, it won’t be funded. This sounds horrible (“oh no, we failed!”) but it’s a lot better to know that something isn’t commercially viable BEFORE you put a lot of money into it.

3)    Marvel and DC comics need to give almost total writing power to their writer and artist team, taking it from the hands of their editors, and ending the era of editorial mandate once and for all.

People don’t hate “cape books.” They hate that cape books often make no sense. They want some friggin’ continuity! They want the books they read to not insult their intelligence and they don’t want to pay for a product that tries to sell them other products. They want a great, diverse, interesting superhero comic… and I’ve got no problem coming into the market with Super! and winning back the jaded fans (usually with a “show me on the doll, where did Marvel hurt you?”).

I’d also like to see those big companies change their structure, stop making bonehead decisions, and really start leading by example. It would grow the industry, push comics forward in more ways than one, and really be better for both creators and fans.

4)   Comic publishers should farm talent from Comixology Submit and Kickstarter. There are a ton of comic publishers that have closed submissions and only farm talent from other comic publishers. How then, will they get their talent, other than from catching them as they run, screaming, from the clutches of another company? While it’s great to see that initial spark from creators once they’re freed from editorial mandate, publishers should also try to find fresh young talent who can push comics while they’re still young, idealistic, and ready to prove themselves.
That’s how the artists from Super! found each other, and our internal pages look as good as most comic book covers. Part of this is because we’re obsessed with quality. The other part is because every panel and every page is essentially a job interview. Established publishers should be the NFL to Kickstarter / Comixology Submit’s college football, but instead they often ignore what is an obvious source for emerging talent. As more publishers come to recognize this, it will be comic fans from all over the world who will reap the rewards cultivated from the rich and diverse depths of independent comics and their amazing artists.

5) Comic publishers need to challenge Marvel and DC comics at their core: superheroes – and stop being afraid of superhero comics. I know that Marvel and DC have a huge chunk of the market share, and that superhero comics are their bread and butter. This usually forces other publishers to look to different genres, and it’s why we’ve seen a glut of “dark and edgy” comics.

This is a mistake. The key to a great comic is a great story and great team, regardless of the genre.

All comic fans and creators want to push comics forward, but in a changing industry, which way is forward? I think we’d all agree that Boom’s first goal of promoting gender, racial, and LGBT diversity is a step in the right direction for comic content. But can any of the ideas proposed by Super! help the industry as a whole? Does Super! really push #comicsforward ?

Justin Piatt is the co-creator of the self-produced superhero comic Super! For more info, check out: www.super-comic.com