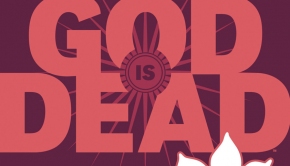 So the old gods of various cultures come back to Earth, set foot anew and then follows utter despair and