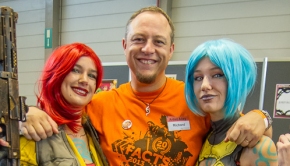 ‘Darkchylde‘ became something of a comic craze in the 1990’s, partially due to superb and sexy artwork and partly due