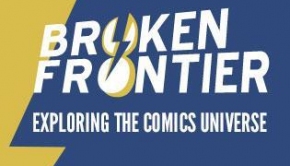 The big news for Broken Frontier doesn’t stop. Hot on the heels of the successful Kickstarter campaign for its inaugural