Out from Bluewater tomorrow. You can get the print copies at Comic Flea Market by clicking here: http://bit.ly/ZlD5Bs Jailbait #3 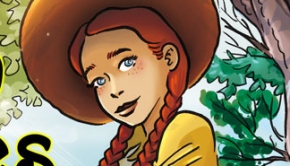 Bluewater Productions has provided C4S with a preview to Anne of Green Gables #1, in stores (print and digitally) August