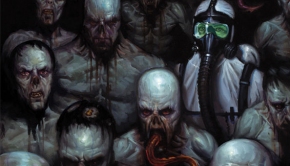 I’ll be completely honest: I hated the original Strain novel on which this graphic novel—and the recently launched FX television