THE TIME IS NIGH!! Tomorrow morning at 9:00 AM pacific time, Noon Eastern, the long rumored Ursa Minor Special Edition 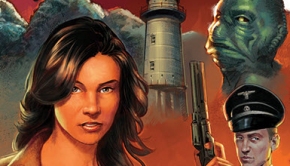 1930s adventuress Athena Voltaire is admittedly inspired by Doc Savage, the Shadow, and other giants of the pulp era, and