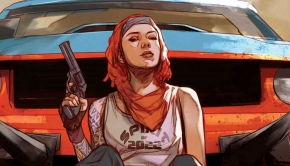 Spinning out of the legendary Fighting Fantasy series of gamebooks created by Ian Livingstone and Steve Jackson in 1982, the