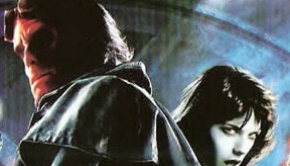 Sony presents a double bill of supernatural adventures starring HELLBOY. In short: A demon, raised from infancy after being conjured