For the past thirty years, Dark Horse Comics has worked to bring filmmaker James Cameron’s epic sci-fi blockbusters like The 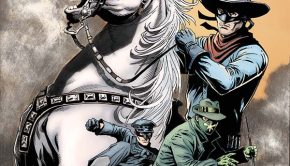