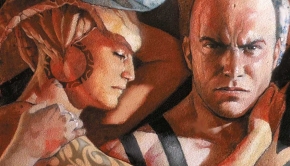 In a galaxy decimated by a brutal war, an ancient prison ship, called Empyreon, floats alone in the void. Within