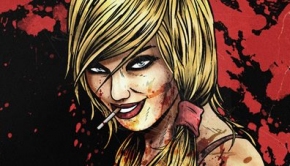 To state that Dan Schaffer is pushing the envelope, might be an understatement. Setting the tone with setting up a