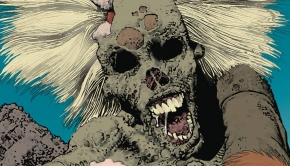 Review: Shadows on the Grave #6

Another anthology issue, pretty much entirely created by Richard Corben. For those who don’t know, Corben contributed to the gamut