Bill Maher is a condescending prick. But Bill Maher knows this. In preparing my rebuttal on Bill Maher’s recent statement’s

On Veterans Day, representatives of the United States Army and Navy, along with chapters of the American Legion, the Marine 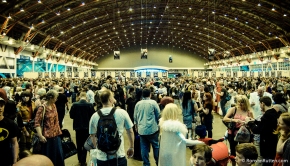 LFCC 2014: The Death Of Superman & Not Seeing Stan Lee

By Ron van Rutten I got into comics somewhat late in my life, well, maybe not THAT late, but I