The Caravan Is Moving In – Comics for Sinners
News 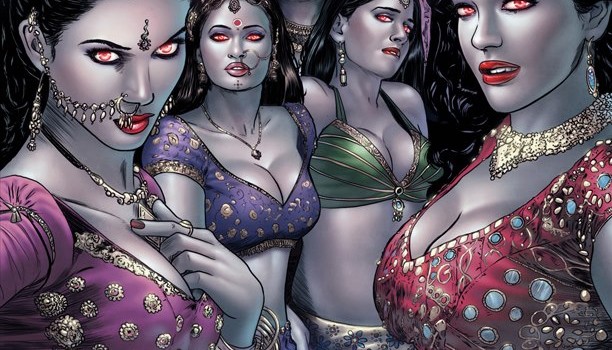 The Caravan Is Moving In

The Caravan is a classic horror/action/adventure in the trend of ‘From Dusk till Dawn’ and ’30 Days of Night’ copiously coated with spicy Bollywood masala that will make you smack your lips with the taste of bloody curry!

Written, scripted and drawn by Shamik Dasgupta, this OGN is close to completion.

For ages a coven of vampires travel the deserts of Rajasthan under the guise of a Caravan of Nautanki or a Gypsy Circus. They lure the unsuspecting villagers to invite them to perform and through the course of the night feed on every living soul. Their heinous deeds go undetected for years, possibly even centuries until a boy named Asif survives their attack.

Years later the boy grows up to be a smuggler across the border, and on afateful day he gets arrested. Jai, the custodian cop and Asif get stranded in the desert and find shelter in a fort run by border security force and their volatile and violent Officer in Charge, Daroga Bhairo Singh.

As night creeps forth, the caravan of vampires appear once again on the horizon. Asif becomes terrified and tries to warn them but no one believes him. Instead, mesmerized by the glamour of the Nautanki, they make the fatal mistake of inviting them to the fort. What follows is a night drenched in blood as the vampires begin their massacre. Asif has escaped the Caravan once, but can he pull off that impossible trick again?