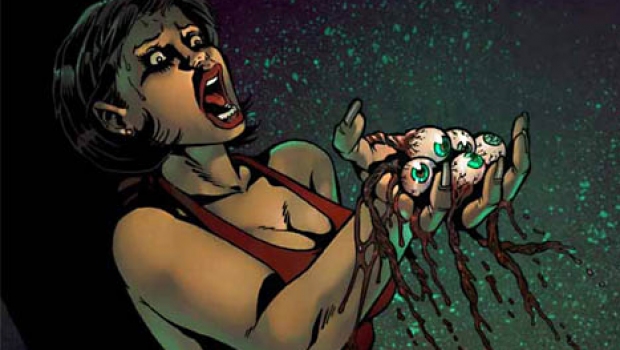 “Erica Heflin proves women do not have to be innocent victims in horror. There are a lot of women in The Envy, and some victims, but absolutely none of them are innocent!” said Aazurn Publishing Publisher/Editor Gary Scott Beatty.

Young Danielle’s world is forever shattered by David’s beautiful and exotic new girlfriend. When men fall for her charms and Danielle’s BFF becomes ill, she begins to wonder if there is something evil — even monstrous — going on.

“Erica is all over indie comics today and we’re lucky to have her and The Envy,” said Beatty. “She’s helping us launch our Indie Comics Magazine Presents series of done-in-one, one-shot comic books.”

Erica J. Helfin is writer, editor and publisher at Felinix Publications, a source for independent comics. Webcomics “Of the Grave” and “Robomastyx” and a growing collection of minicomics can be seen online at ReadWebComics.com.

Heflin’s “Flesh of White” will soon be available through Inverse Press, and new series “Chronographer” has found its home at Grayhaven Comics.

Last year, Heflin’s “Mother and Son” and “Of Wolf and Woman” were picked up by Grayhaven Comics. “The Black Hand” is available digitally through Alterna Comics and can be found at Comixology.

A video preview of The Envy, online at http://indiecomicsmagazine.com/, offers a peak at newcomer Rom Friere’s sexy, disturbing art. The Envy is offered for pre-order in June’s Previews from Aazurn Publishing.