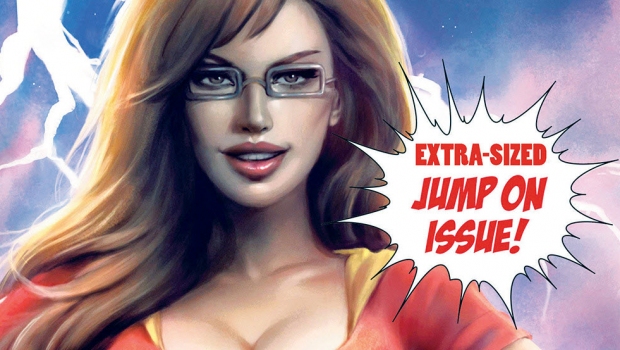 The future of Geek-Girl is Incoming

Created and written by Sam Johnson (The Almighties, Cabra Cini: Voodoo Junkie Hitwoman) and illustrated by Carlos Granda (Arachna, Grimm Fairy Tales), Geek-Girl is hot, popular college co-ed Ruby Kaye, who landed a pair of super-power-inducing tech glasses from her college’s resident brainiac on a drunken whim. Since doing so, Ruby – given the moniker ‘Geek-Girl’ by her BFF Summer following her klutzy attempts to demonstrate her newfound powers to their mean girl friends – has grown from shallow ‘It Girl’ into a true super-heroine, and been asked to front a Super-Team…

The beginning of Ruby’s New Direction as part of the team is now available, remastered, with 12 pages of New Material, in the Geek-Girl #5 Deluxe Edition with cover by Sun Khamunaki (Lady Death, Red Sonja); and, releasing simultaneously, Geek-Girl: Incoming features just the new material from this.

Johnson fills us in on just what that new material is: “We’re going to be introducing two new characters coming to the Geek-Girl series as Ruby’s Super-Team embarks on their adventures. Mean Girl – a crooked valley girl with super-tech – is setting herself up to potentially be a nemesis for GG; and Pete the Pimp is set to play a significant role in Summer’s life!

“That doesn’t mean Summer will be turning to prostitution,” Johnson laughs; “Ruby’s BFF Summer is basically in love with the whole Ruby-being-a-Superheroine thing, and she desperately wants something like it for herself… This ambition is set to take her down some dark alleys, among which, the shady Pete ‘The Pimp’ Stenson resides… and he has a connection to a source of super-powers…”

Stenson features in a 7-Page tie-in strip illustrated by Meisha Mimotofu, colored by regular Geek-Girl series colorist Chunlin Zhao, alongside a preview of Mean Girl’s introduction, and a peek inside the Super-Team’s HQ. Johnson continues: “There’s a lot about the HQ that Ruby and her team-mates aren’t aware of; Grant Morrison’s out-there run on Doom Patrol is my biggest influence, and that’s going to play a part in the weirdness that inhabits this place…

“Meanwhile,” Johnson concludes, “Mean Girl is a character who, with her, ‘like, totally-Valley-Girl-speak?’ is a character that’s great fun to write, but is also going to present a very serious threat to GG’s Team, and the Geek-Girl #5 Deluxe Edition is a great place to jump on board the Geek-Girl series for what’s to come…”

Geek-Girl #5 Deluxe Edition – and Ltd ‘Striking’ Variant – with covers by Sun Khamunaki, and Geek-Girl: Incoming, featuring the new material from these, are available now at www.geekgirlcomics.com and www.comixology.com

“A blast to read; fans of indie superhero comic books will find an all-around winner in Geek-Girl.” -Leroy Douresseaux, I Reads You.