Rich occultist Edward Harcourt is on his deathbed, and after a lifetime of searching, he believes he’s found the answers to true magic. Edward wants to pass along this knowledge to his grandniece Violet. His decision is a problem for his sister Edwina, who wants to keep his legacy for herself. Plus the gloomy Violet really just wants her troubled family life to improve.

The Harcourt Legacy is an occult-tinged family drama for fans of The Wicked and the Divine, The Magicians, Morning Glories, or Dead Like Me. It’s a coming-of-age story that is ultimately about family, selfishness, maturity, and where you find magic in the world. It features beautiful art and storytelling by Jason Federhenn (Pecking Order, Dead Guys) and Josh Burcham (Samurai Jack, Transformers).

The Harcourt Legacy is collected in its entirety in this trade paperback, which also includes a gallery of all the individual issues’ variant covers, with art from Brendan Cahill, Cody Vrosh, and Jen Bartel.

Writer Brendan Cahill (Silver Sable, Morbius) talks about Violet, the protagonist of the book: “I’m not a sixteen-year-old goth girl, but I like to think we all have one inside us somewhere. Not because we ate her or anything. You know what I mean. Our inner goth girl feels deeply, is full of wit, venom, and bravado, and calls out bullshit when she sees it. I think (I hope) that Violet is my inner goth girl, and if The Harcourt Legacy helps you find yours at all, then maybe our inner goth girls can be friends and smoke cloves and talk about how pissed they are they never got to see Tones on Tail live.”

THE HARCOURT LEGACY TPB will be in a comic book store near you on February 28, 2018. It is now available for pre-order with the Diamond Previews codes DEC171013. 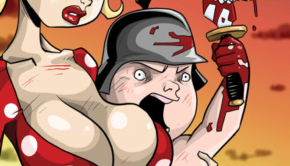