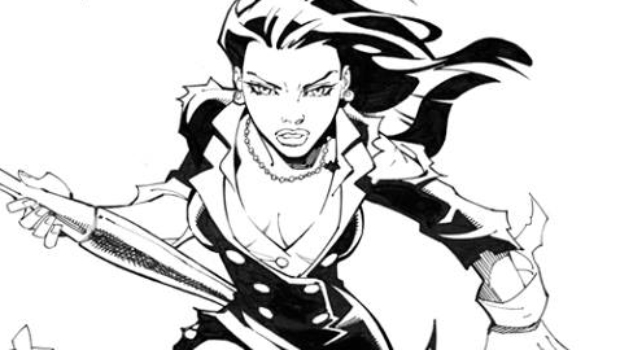 Who’s your favorite inker? The Inkwell Awards, a non-profit organization devoted to public education and promotion of the art of comic book inking, invites all to vote for the industry’s best of the year. The official public ballot will be available on the Inkwells’ homepage from April 1 through April 15.

Voting is open to fans and professionals alike. In addition to “Favorite Inker,” categories include “Most Adaptable,” “PROPS” (inkers deserving more attention), the “S.P.A.M.I.” (Small Press And Mainstream/Independent) and “All-In-One” for pencilers who ink their own work.

As a courtesy, also listed on the ballot are the nominees for the Joe Sinnott Hall of Fame (“HoF”), a lifetime achievement honor for an outstanding inking career of 25 or more years in American comics, whose winners are chosen by an internal committee (to avoid a “popularity contest” where recent names have more influence than past masters). Two nominees are awarded each year.

Also to be chosen internally is the Special Recognition Award. This lifetime achievement honor differs from the HoF award due to one or more factors such as the artist being out of the “public eye,” having limited name-recognition due to semi- or full retirement or death, limited-yet-influential output, social barriers such as gender/race, or other factors that might otherwise limit them from being nominated for a traditional HoF award. The SRA nominees are not listed on the ballot but will be discussed at the awards ceremony. As announced at last year’s ceremony, the award has been renamed the Stacey Aragon Special Recognition Award (SASRA) in honor of the longtime member of the non-profit who succumbed to cancer a year ago after a 10-year battle.

“We’re as excited as ever for this event, where the best of the best ink artists and their work get the recognition they deserve,” said Bob Almond, founder and director of The Inkwell Awards. “Though inkers have their own fans and followers, many often go unnoticed or are glossed over by most awards events. Ours caters specifically to ink artists and allows them to be recognized and appreciated in various categories. We encourage everyone who appreciates good work to participate; the more voters, the better.”

Once voting ends after April 15, the winners will be announced at the live awards ceremony at Heroes Con in Charlotte, NC on Friday, June 15th.

The Inkwell Awards is the only existing official 501(c)(3) non-profit organization whose mission is to educate the public and promote the art form of comic-book inking, as well as annually recognize the best ink artists and their work. Now celebrating its 10-year anniversary, the organization is overseen by a committee of industry professionals and assisted by various professional ambassadors and contributors from within the comics community. They sponsor the Dave Simons Inkwell Memorial Scholarship Fund for the Kubert School and host the Joe Sinnott Hall of Fame Award.

THE INKWELL AWARDS are for 2017 cover-dated interior American comic-book material.

Favorite Inker: Favorite ink artist over the pencil work of another artist.

Most-adaptable: Artist showing exceptional ink style versatility over other pencil artists. (Every nominee must have at least two sources cited.)

Props award: Ink artist deserving of more attention for their work over other pencil artists.