Terry Moore is one of the most outstanding and friendly (please add ex..." /> The KILL ME ZOE! Contest. Ready, set, GO! - Comics for Sinners
News 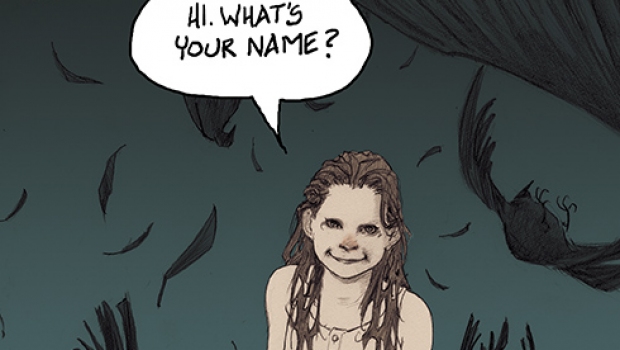 Terry Moore is one of the most outstanding and friendly (please add extra positive adjectives, because he deserves them! And go buy his comics because you HAVE to HAVE his comics!) creators I have ever had the pleasure of meeting, and he just announced a very VERY cool contest!

Here is what he has to say!

Only in the wonderful world of comics is this possible. I’m asking for an otherwise perfectly sane normal person to be the next victim of a serial killer in my comic book series, Rachel Rising. If you’re a fan of the book, you know Zoe, our 10-year old resident evil, has been going through victims faster than a competition eater goes through hot dogs. She’s insatiable. So we need a brave and foolish volunteer to go talk to her about it in an upcoming issue, see what you can do with her. Sound good?

The down side of winning this contest is, it will result in your grizzly, fictional death. Awww. The up side is, you will be forever immortalized in comics history! Yaaay! Long after you and I are gone, the issue with your demise will be around somewhere, enjoyed by later generations who will know your face and first name and talk about your encounter with our beloved psycho. I mean, we still talk about Napolean and he wasn’t even in a comic. Just think of it as a walk-on part in your favorite horror movie only, in comics no one can hear you scream. If this sounds fun, then you’re my kind of reader!

In posting the idea for this on Twitter, I found a lot of people ready and willing to volunteer, so we’re going to have a contest to pick the winner. Here are the rules:

1. Put the words RACHEL RISING on display to the public and send me a photo.

2. Do not deface somebody else’s property.

That’s it. Those are the rules. The winning photo will capture either a very public display of RACHEL RISING, or your photo was taken in private but is so beautiful cool it goes viral. So a homemade RACHEL RISING T-shirt has just as much chance of winning as the owner of a building who drops a banner down one side, depending on the T-shirt photo’s number of internet reposts. Creativity and fun will level the playing field. It can be big scale or small, pro or amateur, the thing is how many people saw it at the time, or see it in reposts. Either the winning moment is in the photograph or it’s in the viral activity once the photo is posted. It’s all about exposure and how creative you were to get it. You can hold a sign up at the Super Bowl or write RACHEL RISING all over yourself with a Sharpie. Write RACHEL RISING in huge letters in the snowy slope downtown or pin a sign on auntie’s butt and follow her around the mall taking pictures. Just have fun, because a photo posted online with 800 likes would be a stronger candidate than a photo taken in front of 50 people. Unless the photo with 50 people went viral. That would be cool, too. The more exposure for RACHEL RISING the better. I will choose the winner based on equal parts creativity/fun/public exposure of the words RACHEL RISING, either during the shot or after the shot is posted.

THE WINNER: One winner will be selected by me. The winning entry will make their guest star appearance in Rachel Rising issue # 25 or #26. The winner will also receive the page of the original art depicting your fictional death scene, signed and dedicated to you, the Raphael #1 brush that drew it—signed, and a signed copy of the comic.

HONORABLE MENTIONS: In addition to the winner, I will select 10 Honorable Mentions. These wonderful contestants will receive a signed copy of the new trade paperback, Winter Graves, which comes out in March and personal note thanking them for their ingenuity and participation. I have been known to draw sketches on personal notes… one of my many bad habits.

ENTRIES: The contest begins… now! You can enter as many times as you like. If you have 10 ideas, you may submit 10 photos. The more the better. Email photos or submission links to TerryMooreArt@comcast.net  Use the subject heading Kill Me Zoe Contest. All entries will posted on this blog and my other web sites.

DEADLINE: the contest ends at noon, March 10. Winner and honorable mentions will be announced March 12 on this blog.

LEGAL:  By submitting your photo entry, you are agreeing to give me permission to post your photo entry online and in the book Rachel Rising. You will retain ownership of all rights to your photo and are free to use that photo containing my book title for your own purposes and gain, in perpetuity. Entering the contest is your consent to the purpose of the contest, specifically the use of your likeness and first name in my comic book Rachel Rising. No financial payment is due or will be paid to you. This contest does not condone and will not accept entries that illegally deface public or private property. If you are under 18, no nudity. No painting or embarrassment of animals. Do NOT risk your life or safety taking crazy shots on freeways, roofs and the like. Play nice, play safe, don’t break the law. This contest  gives you permission to display the words RACHEL RISING for the purpose of the contest, but does not give you permission to use the words RACHEL RISING for financial gain.  RACHEL RISING is © ™ 2014 Terry Moore.

Please, spread the word about the contest, RT on all your social media, mention it in your blogs and columns. The more the merrier! 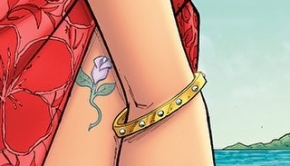