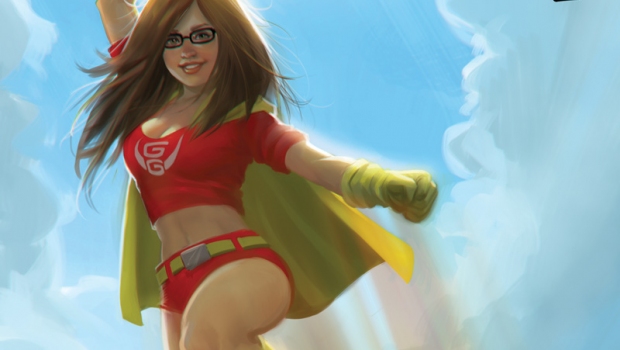 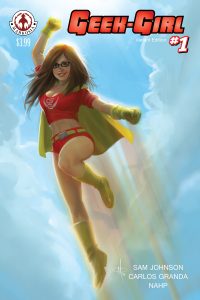 Created and written by Sam Johnson (The Almighties, Cabra Cini: Voodoo Junkie Hitwoman) and illustrated by Carlos Granda (Grimm Fairy Tales, Charmed), in the 4-issue Geek-Girl Mini-Series we meet attractive, popular Maine college coed Ruby Kaye – a girl who is used to getting anything she wants. But when she overhears the resident college brainiac talking about super-tech glasses he’s invented and decides she wants them – her whole world gets turned upside down.

When we’re introduced to Ruby, she’s a girl flying around in a super-hero costume, looking for crime, chatting to her BFF Summer on her cellphone, questioning if she’s ‘doing it right;’ because she’s been at this a couple nights now and nothing’s happening. And then something does happen. Right in front of Ruby, Neon Girl – Maine’s resident big-shot Super-Heroine – is blasted through a billboard by a mysterious new villain.

“Ass-kicker Neon Girl is taken off the map – and requiring a life-saving operation – by this extremely powerful, enigmatic woman, Lightning Storm, who seems to have come from nowhere,” says Johnson; “and Neon Girl wants to know what Ruby’s going to do about it.”

“A scared Ruby reveals how she got the glasses on a whim, how it was her friend Summer who made her a costume and came up with a superhero name for her – and how she doesn’t really know what she’s doing,” Johnson continues. “But this isn’t a point of view the no-nonsense Neon Girl has any time for; her attitude is that ‘Geek-Girl’ has super powers and sure dresses like a superheroine, so she needs to step up and stop Lightning Storm!” says Johnson.

And while Ms. Kaye’s trying to get her head around this, things have taken a hit in her social life; thanks to a glitch in the glasses’ programming that’s messed with her head and made her super-kultzy, the only evidence she’s provided her ‘cooler-than-thou’ clique of her powers has involved knocking drinks over them – alienating her from all but Summer. Johnson concludes, “So with a social life in tatters and a new status she doesn’t really understand, Ruby has to try and take on an extremely dangerous force who’s just hospitalised someone who’s like a hundred times better at super-heroing than she is. Let’s see how that goes…”

Geek-Girl #1 is out now from Markosia in Regular, Digital and Variant editions, and available at www.geekgirlcomics.com and www.comixology.com