The Next Generation of CYBERFORCE Remains Affordable – Comics for Sinners
News 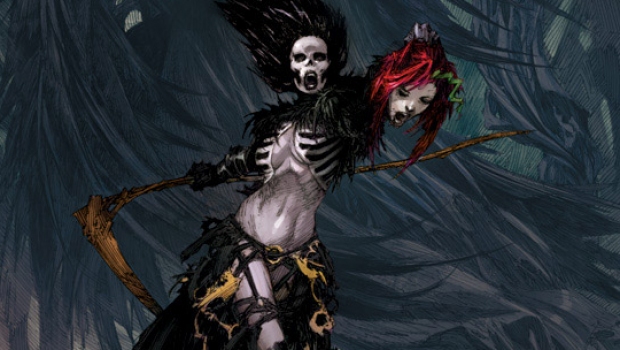 The Next Generation of CYBERFORCE Remains Affordable

Cybernetic freedom fighters defend civilization from evil corporations and their takeover of the world in CYBERFORCE. Written and created by Marc Silvestri (THE DARKNESS, Uncanny X-Men), with art by Marco Turini, colors by Andy Troy (Astonishing X-Men), and finishes by digital wizard Stjepan Sejic (RAVINE, THE DARKNESS: THE DEATH OF JACKIE ESTACADO), CYBERFORCE #6 marks a landmark issue for the series and the beginning of a new story arc. CYBERFORCE launched with a record-setting promotion that gave readers the first five issues for free, making issue 6 the first issue in the series to cost anything, offered at the affordable price of $2.99.

Thanks to the crowdfunding site Kickstarter, TOP COW PRODUCTIONS, INC., and their loyal and amazing fans were able to raise enough money to resurrect the CYBERFORCE franchise. As a result, the first five issues of CYBERFORCE were sent to retailers all across the world to give away for free. Nothing like this had been done in comic book history, and as a result, fans have clamored for more. Issue 6, due in September, brings an end to the free promotion, but Silvestri trusts that the first five issues and the strength of this new story are enough incentive for readers to keep going.

In CYBERFORCE, corporations control everything, and a young woman named Velocity must escape her mother and sister’s grasp in order to search for a very important man named Stryker. With the big companies on top, normal people are forced to live in what’s left of the cities. These people are protected by CYBERFORCE, a group of former soldiers who have banded together to fight for the weak, hunted, and oppressed. After the conclusion of their first story arc, issue 6 introduces readers to a new purpose and mission for the CYBERFORCE crew. Revenge has been achieved, so survival is now top priority as a more dangerous and uncontrollable threat has been activated.

“The lines between good and evil, and fact and fiction continue to blur as CYBERFORCE falls farther down the technological rabbit hole,” Silvestri explains. “Artist Marco Turini brings our worst nightmares to life as we learn that Cyber Data may in fact be the least of our problems.”

“Marc Silvestri and Matt Hawkins have a built an interesting world here.”
-IGN

“The writing and artwork are solid and the world presented promises intrigue as well as sweet robot/cyborg fights.”
-Destroy The Cyborg

“Cyberforce is a series I normally wouldn’t have read, but found the writing to be excellent, gradually getting better with each issue. It’s now been added to my pull list.”
-Nerd Nation Radio
Comic Book Resources has given the series praise and recently posted the entire fifth issue of CYBERFORCE on their site for fans to enjoy.

CYBERFORCE issues 1-5 can be read at the Top Cow website, or picked up for free at any local comic shop.

CYBERFORCE #6 will be released in comic shops on September 18 (Diamond Code MAY130409) and will be available digitally on the Image Comics website as well as ComiXology.