..." /> The Sphinx’s Gaze: The Significance Of Hair To Female Super-Heroes – Comics for Sinners 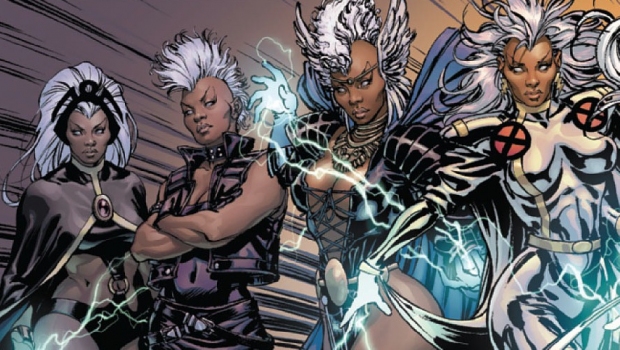 The only comparison that ever expressed adequately to me the importance of a woman’s hair in the male world was explained as the equivalent of a man’s suit. Nothing else even comes close. To men a nice suit is both armor and shield and a really good suit, tailored well, can be used as a devastating weapon when used correctly. Now think about this for a minute in reference to females, hair, and comic book characters. Girls are pummelled repeatedly at an early age with messages about their hair and the importance it holds. Like a man’s suit, a woman’s hair defines her and in fiction it’s often used to literally to outline her character. Rapunzel was imprisoned for it, Pippi Longstockings braided ponytails helped free her spirit and Princess Leia‘s side buns were almost their own plot point. In the superhero world, hair is no less important and it’s influence on my choice of heroes growing up was epic.

To this day, Marvel’s Medusa will always be a win to both comic and non comic fans. As a kid, reading about her in Fantastic Four, she was mind blowing. Medusa went on to anchor the Inhumans and truly is a fantastic female role model. But her hair was always the draw! Hair that not only was long and flowing but DID THINGS ON IT’S OWN. As a tomboy she showed hope for all women. Every time I heard “Good lord, what happened to your hair” I secretly thought of Medusa. If only I could be superhuman and DO things with my hair instead of having to brush it into submission.

Sue Richard‘s tame bob, Mary Jane‘s shoulder length well kept layers; they were good girls. The “in your face” females that appealed to me always walked on the wild side. Red Sonja‘s hair was wild and free and BRIGHT RED. Rogue‘s small white streak in the front made her more rebel then victim despite her issues with touch. Whether you like or dislike Storm, her mohawk made everyone rethink her as a hero.

Yes many of these images are drawn by men and often comics are criticized with a hyper sexuality to appeal to fans, but we don’t talk about the appeal of these images and the way they are interpreted by females in a NON sexual conversation. Maybe it’s an advancement of design or storytelling that has drawn creators away from fabulous over the top hair. Maybe it’s simply a fashion change. There are literally hundreds of conversations online every day about drawing female readers to comic books and yet very few want to admit and cater to the impact of hair on our heroes by something as simple as giving them crazy awesome fantastic hair.