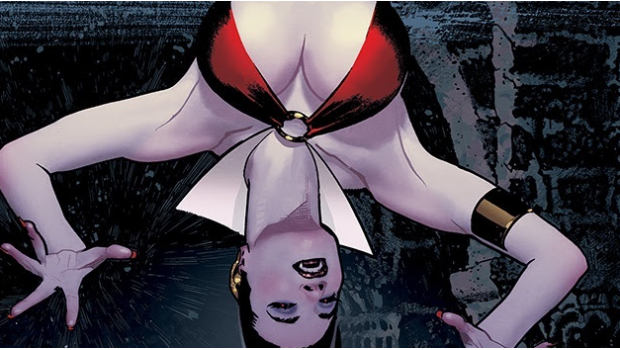 Vampirella enters an entire multiverse of alternate iterations of herself, in this fall’s blockbuster Vampiverse!
Writer Tom Sniegoski (Punisher, Young Hellboy) returns alongside co-writer Jeannine Acheson (Vampirella Valentine’s Day Special) for the most expansive Vampirella story ever told. Artist Daniel Maine (Chastity) has had a blast designing versions of Vampirella from every conceivable alternate universe, and more to come in the most expansive story for the character ever! They’re joined by colorist Francesca Cittarelli and letterer Taylor Esposito.

Each thread across the fabric of time and space has its own Vampirella to protect their reality. Something, or someone, is suddenly hunting them down, stealing their precious life energies. It’s up to the Vampirella we all know and love to gather her special sisters and take down this threat before it destroys the Artist, the creator of all of existence. Fans will meet such fun new characters like Vamp-Bot, Cave Vamp, The Invisible Vamp, and many more.

“When Jeannine and I were working on the 2021 Vampirella Valentine’s Day Special, the idea for Vampiverse was hatched,” said Tom Sniegoski. “To see it actually becoming a reality is incredibly exciting, and I can’t wait for folks to see what we’ve come up with.”

Jeannine Acheson added, “When we were coming up with the idea, we never imagined Dynamite would let us do it, but here we are! I’m thrilled about Vampiverse! It’s awesome to be writing my first comic series alongside all of these talented writers and artists.”

Tom Sniegoski’s legacy with the Daughter of Drakulon now goes back nearly 30 years all the way back to 1993. First there was the Dracula War, then Bloodshed, The Mystery Walk, Death & Destruction, and the recent Rebirth in the relaunched Vengeance of Vampirella. He’s also brought along so many signature collaborators like Buzz, Ed McGuinness, Amanda Conner, Michael Sta. Maria, and now Jeannine Acheson and Daniel Maine. Now the most prolific writer of the character ever continues his fan-favorite saga.

Vampiverse is not to be missed by longtime and new fans of the character alike, as one of the biggest stories since the pivotal Death & Destruction, with this new series initially developing as a spiritual sequel to that iconic moment.

For a series starring so many unique portrayals of the character, a range of top tier cover artists were a perfect match. Adam Hughes leads the pack, and he’s actually reuniting with Sniegoski, after doing beloved covers for the Dracula War all the way back in 1993. Stephen Segovia, Maria Laura Sanapo, Meghan Hetrick, and cosplayers starting with Rachel Hollon finish out the list for the first issue.

VAMPIVERSE #1 is solicited in Diamond Comic Distributors’ July 2021 Previews catalog, the premier source of merchandise for the comic book specialty market, and slated for release in September 2021. Comic book fans are encouraged to preorder copies of the issue with their local comic book retailers. It will also be available for individual customer purchase through digital platforms courtesy of Comixology, Kindle, iBooks, Google Play, Dynamite Digital, ComicsPlus, and more!