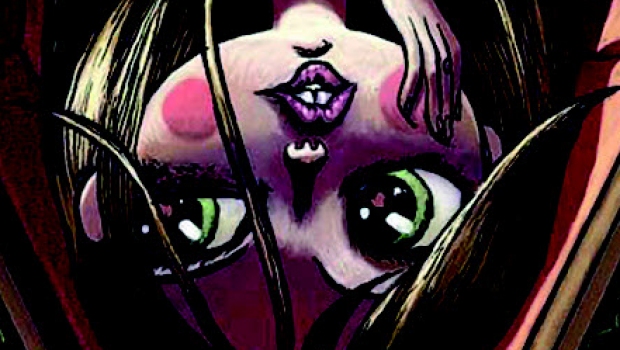 Titan Comics has provided C4S with their March 2018 Solicitations…

Follow two competing crew of pirates with this epic story based on the shared-world adventure, multiplayer game from Rare due for release in early 2018 on Xbox One and Windows 10!

Two crews sail the Sea of Thieves in a race to track down an ancient treasure. Along the way they’ll deal with undead hordes, devious traps and their own bitter rivalries, but who will ultimately claim the legendary loot?

A band of mutants slog through the harsh deserts of a dystopian planet in search of the Factory – The last semblance of civilization left among the wasteland.

Fighting American: The Ties That Bind #1

The villainous Madame Chaos is safely behind bards, but the chaos she’s unleashed is only just beginning. Faced with new and classic enemies, some old Flagg family secrets are revealed that could break our heroes all-American spirit!

For fans of Neil Gaiman and Tim Burton’s The Corpse Bride and Nightmare before Christmas!

When roaming warriors Atlas and Axis return home to find their village destroyed by Viking raiders, they set off on a perilous journey across land and sea to save their friends!

Witness the very beginning of the Assassin’s Creed Brotherhood!

Awakening in an ancient city, plagued by a twisted endemic – Where horrific beasts stalk the shadows and the streets run slick with the blood of the damned – A nameless hunter embarks on a dangerous quest in search of paleblood…

Based on the best-selling Games Workshop boardgame!

The Deathwatch are the best of the best from all chapters of Space Marines! They alone have the strength of mind and body to battle the aliens across the Universe, defending humanity from the Xenos that would destroy them.

The second arc of the best-selling, fan favourite series!

The Vortex Butterflies Trilogy reaches its game changing conclusion with devastating consequences for Gabby, Cindy and The Doctor!

The Doctor, Alice, and the Saping – Now growing further into adulthood – take on another selection of insane adventures!

The bookstore smash-hit returns for a brandnew story, picking up the threads from the most recent bestselling Rivers of London novel, The Hanging Tree

When his latest contract turns out to be an old acquaintance from his military days, the fresh-faced hit man finds himself battling against his own conscience as secrets from his past begin to reveal themselves.