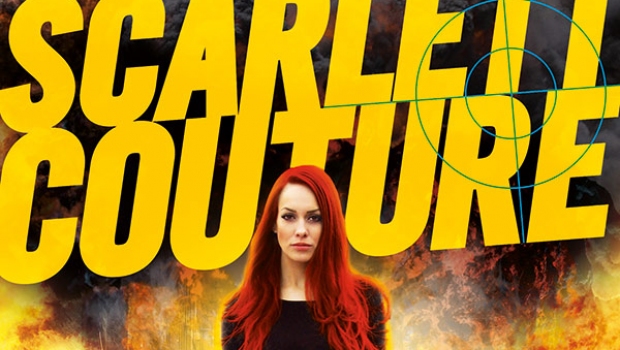 Also this month: Al Ewing (Loki) and Rob Williams (Ordinary) present the second epic collections of THE ELEVENTH DOCTOR and THE TENTH DOCTOR VOL. 2, the latter of which sees award-winning writer Robbie Morrison (Spider-Man) joined by artist Daniel Indro for an adventure into the battlefields of WWI – and the Weeping Angels! Plus; stunning conclusions to MONO: PACIFIC (written by best-selling Star Wars scribe Brian Wood) and CAP STONE!

Scarlett Couture is all of these things, and more. She’s a spy.

Check out the trailer to the series:

DOCTOR WHO: THE NINTH DOCTOR #2

Don’t miss the second thrilling installment of Weapons Of Past Destruction – an all-new miniseries adventure featuring the Ninth Doctor – as played by Christopher Eccleston – along with companions Rose and Jack!

Get dragged into the Time Vortex as the Doctor and his friends uncover time-lost Gallifreyan super-weapons being sold on the black market!

Who are the cosmically-empowered Lect and Unon – and can the Doctor help stop an all-new Time War before it starts?!

Key points:
– The second thrilling installment of the brand-new mini-series Weapons of Past Destruction!
– Written by Cavan Scott (bestselling author ‘Who-ology’)!
– Features characters Rose Tyler and Captain Jack!
– Join the adventure with the Ninth Doctor as played by Christopher Eccleston!

– Comes with three covers to collect!

The thrilling finale of ‘The Fractures’ is here – and it will get under your skin!

Bursting from a twisted parallel universe and clawing their way through the void, the Fractures are here, and nothing could prepare the Doctor for their insidious assault on reality!

The Doctor, Clara and UNIT must battle the Fractures, as they slip through the cracks in our world to wear the skin – and bodies – of innocent people, puppeteering them from the inside!

When the war spills out of quiet suburbia and threatens the world, it will take a father and daughter – separated by whole universes – to bring the conflict to an end!

– The thrilling finale of ‘The Fractures’!
– Comes with two covers to collect!

A terrifying pyramid has appeared in the skies above New York City, and it’s here to claim an ancient secret – buried in the body of a very-much alive movie star

As the Doctor attempts to unravel the conflict, Gabby and Cindy’s friendship is stretched to breaking point. Has Gabby changed too much in her short time away – or has she changed just enough to save the day?!

A thrilling TARDIS chase through the atmosphere – after no ordinary comet! Tracking the Entity’s signal from the Berlin Wall in 1976 to Rome, 312AD, the Doctor, Alice, Jones and ARC stumble into an ancient mystery that will forever change the course of human history! And the burden and dangers of a life aboard the TARDIS start to hit home for Jones – is this his farewell tour? Rob Williams (Ordinary) and Warren Pleece blast into a brand-new story arc! Don’t miss the shocking reveal of what’s inside the comet!

The second collection of the sell-out smash new Tenth Doctor series, from award-winning writer Robbie Morrison (Spider-Man, Drowntown, Nikolai Dante) and Daniel Indro (Sherlock Holmes, Green Hornet), sends the Doctor and new companion Gabriella Gonzalez hurtling back into the past – and into the trenches of World War One!

Bombed by the German artillery, arrested as spies by the British, Gabby and the Doctor soon learn that there’s something even worse moving in the gas and wreathes of smoke out in No Man’s Land… stone statues who move only when you’re not looking at them! The Weeping Angels have come to feed on the futures of young soldiers — in their hundreds of thousands!

A threat in reverse as time inside the TARDIS flows backwards! An ancient alien war for supremacy in the sky comes to near-future London! And the machinations of SERVEYOUinc revealed, when the Doctor hits them where it hurts – their wallets!

Three companions – three times the danger, three times the excitement! Experience every twist and secret reveal in the thrilling second act of The Eleventh Doctor’s first year in comics!

– Collects Doctor Who: The Eleventh Doctor #6-10

Charlie reveals her dark past and connection to Captain Stone. Will it be too much for Lord Chance?

Key points:
– It’s all been leading here – the dark past brought into the light! Is this the end for Cap Stone?

Mono’s uncovered an insane plot by the Japanese to turn the tide of the failing Pacific war…but for his resourcefulness has Mono finally taken on a mission that even he can’t complete?! Find out in the dramatic conclusion!

Following his self-exile from Melnibone, Elric is faced with his biggest challenge ever!

As he lies dying on the shores of an unknown land, he is taken aboard a mysterious ship where time and logic hold no meaning. Several other incarnations of the Eternal Champions are there, but why? What could allow the laws of time and space to be broken for these warriors to meet? Could Elric learn anything from that which he used to be or that which he shall become? So begins an epic adventure across the black seas and into alternate worlds where the lines between dream and reality blur and otherworldly foes must be defeated in order to save the very fabric of the universe and fulfil the albino emperor’s destiny.

“Captures Moorcock’s Vision Like Nothing Before!” – Ron Marz (Silver Surfer)

In South America, Gabriella De La Fuente is quickly losing patience with her role as dutiful wife, and unleashes the full force of the terrifying power she possesses!

In Russia, Captain Armand Malachi has died, his body is no longer of any use. Among the rank and file, though, there is always a new soul to be pressed into service, a new vessel

In London, the man that was Victor Thorpe feels the judgmental eyes of society on him, and decides to take action to silence them all!

Key points:
– Three lives – three incarnations of dracula!
– Check out the trailer that kicked off this series:

Disgraced inquisitor Conrad of Marburg has been forced to abandon his erstwhile ward Elisabeth and the young monk, Clement, while he races to Prague with what he believes is the solution to the ultimate enigma of the Third Testament. However, he is captured by the brutal Sayn and must do everything he can to escape!

But Elisabeth and Clement have realized the solution Conrad has is wrong… can they catch up with him before all is lost and the incredible knowledge he has uncovered falls to the forces of darkness? Find out in this the stunning final installment of The Third Testament.

Join Skipper, Kowalski, Rico and Private on their adventures in this second DreamWorks’ Penguins of Madagascar collection. Feathers are set to fly!

Long has it been whispered around Berk that one day a huge monster will rise from the sea and the world will end… And when a spate of local seaquakes start erupting, agitating dragons, things aren’t looking good… What can scare a dragon?? Hiccup and the gang investigate and they do indeed meet up with something huge… Could this be the end of Berk?

Meanwhile, in a very special back-up story, Astrid is stranded on an isolated island and is hunted by a group of Smothering Smokebreaths… And to make matters worse, she can’t find her battle-axe…