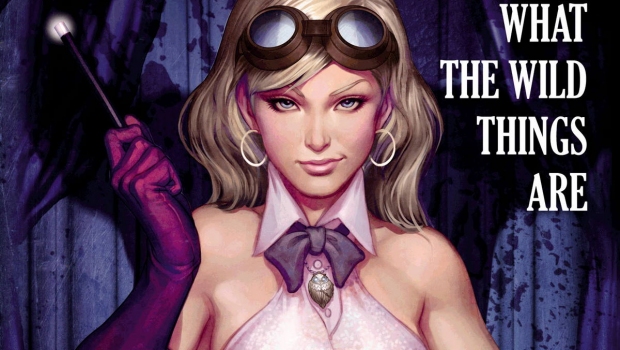 Stuart Jennett’s critically acclaimed dinosaur and Nazis romp, CHRONOS COMMANDOS, is collected for the first time ever, as well as the fourth volume in the sprawling masterwork THE FIRST KINGDOM, by industry legend Jack Katz!

All that, plus Dave Elliott’s literary fantasy WEIRDING WILLOWS, previously only printed in the A1 monthly comic collected at last with a brand-new, exclusive chapter, available only in this deluxe hardcover!

For more information check out the Titan Comics section in the January edition of PREVIEWS – see page 372.

“Dave Elliott has taken this book to a whole new level of brilliance.” – Comics Bulletin

When she was nine, Alice wandered into the Wild Woods and discovered a portal to another world. A world called Wonderland!

Now a young woman, she has spent her childhood discovering just some of the wonders the dimensional nexus of the Weir has to offer – a place where the worlds of Earth, Wonderland, OZ, Neverland, Mars, Pelucidar and Elysium collide, and where anything, and anyone, could turn up when least expected!

From Frankenstein’s Monster to a giant purple T-rex, from talking rabbits to winged monkeys, from a kidnapped Mowgli to a werewolf with a secret, there’s never a quiet day in the Weir – and Alice and her friends are all that stand between these worlds, and those who would exploit them.

In this first mysterious collection, Alice’s father, Doctor Moreau, strikes a deal with the Wicked Witch of the West, and Alice must uncover the truth behind the Witch’s request before her father commits to something he will regret!

Don’t miss this stunning first step into an amazing collision of worlds!

Swooping in from DreamWorks Animation’s smash-hit TV series Dragons: Riders Of Berk, Titan Comics proudly presents all-new original adventures of Hiccup and Toothless!
A thrilling all-ages publication and a broadening of the How To Train Your Dragon universe. Featuring gorgeous animation-inspired artwork by Iwan Nazif and written by Simon Furman (Transformers, Doctor Who Magazine, Thundercats).

NAZIS, DINOSAURS, AND A WAR FOR ALL TIME!

When the Allies and Nazis develop time travel technology that could change the course of the Second World War, only the rugged, cigar-chomping Sarge and his band of misfit soldiers can save the future and stop velociraptors goose-stepping down Main Street!

Dinosaurs. Giant crocodiles. Enormous spiders. Ancient aliens. Einstein with a machinegun. Interdimensional monsters. A towering Nazi nemesis. Time-twisting shenanigans that shake the foundations of causality… All that barely scratches the surface of this glorious, non-stop-action spectacular!

It’s fully-painted, high-octane pulp heroics, just the way you like them!

This collection of the first stunning miniseries is packed full of special features – including declassified in-universe documents, unseen character and dinosaur sketches, and so much more.

Sign up to join the Chronos Commandos – and buckle in for the universe-shaking ride of your life!

“By god that was manly! This is a comic that broadens shoulders and eats only what it kills!” – Steve Pugh (Animal Man, Hotwire)

“If you’re a lover of Sgt. Rock, The War That Time Forgot, or just dinosaurs eatin’ dudes, chances are Chronos Commandos is your cup of tea.
An action-packed first issue!” – IGN

One of the most awesome undertakings in comic book history.” – Will Eisner

WILL THE FIRST KINGDOM REIGN FOREVER – OR PERISH IN FIRE?

The fourth volume in the epic, six-volume saga created by one of the most unique voices in the history of comics!

Hidden kings and reincarnated queens, feuding, immortal cyborg gods; post apocalyptic worlds, a history millennia long and filled with mindblowing secrets of the universe… The First Kingdom is all this and more!

In this volume:
• The conclusion of the first great arc, as Tundran and Fara rise to reach their destiny! Will they steer humanity back to the stars – or spark a final war that will destroy everything?
• Can the transgods of Helleas Voran keep their grip on power when their true nature is revealed? Can the universe survive such ultimate knowledge?
Unparalleled in its scope and dazzling in its intensity, filled with unforgettable characters and art that burns itself into the memory, The First Kingdom will leave you forever changed!
• Newly restored art and lettering!
• Exclusive all-new interviews and special features!