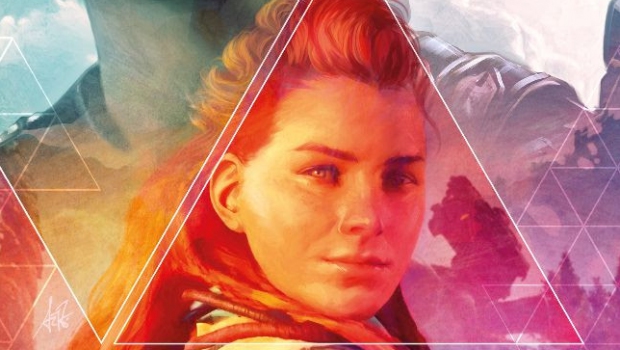 HORIZON ZERO DAWN #1
Brand-new comic sequel story to the award-winning game by Guerrilla. Aloy and Talanah return in a new story set after the events of the game! Nature has reclaimed the planet. Awe-inspiring machines dominate the land, as humanity fights for survival on this new Earth.

THE THIRTEENTH DOCTOR: A TALE OF TWO TIMELORDS TP
The Thirteenth and Tenth Doctor must join forces to save the Earth from becoming an alien battleground! A REIMAGINING OF THE ICONIC TV EPISODE ‘BLINK’!

DOCTOR WHO A TALE OF TWO TIMELORDS TP

In a spectacular return to comics, the Thirteenth Doctor teams up with fan-favorite Tenth Doctor for a deadly encounter with the menacing Weeping Angels and the Autons. Eisner-nominated writer Jody Houser and artist Roberta Ingranata return in this reimagining of the iconic TV Episode ‘Blink’. Collects Doctor Who: The Thirteenth Doctor Year 2 #1-4.

Jump back into the world of Edward Kenway, lead character of the best-selling fan favorite game, Assassin’s Creed: Black Flag, in this beautiful manga adaptation. Return to the Golden Age of Pirates once more and relive the adventures of the brilliant young captain!

Ancient Egypt, a land of majesty and intrigue, is disappearing in a ruthless fight for power. Unveil dark secrets and forgotten myths as we journey to the very beginnings of the Assassin Brotherhood and beyond!

Discover the terrifying secrets of Old Yharnam in this deluxe boxed set of the comic series spinning out of From software/Hidetaka Miyazaki’s critically-acclaimed Bloodborne videogame! Contains three exclusive postcards!

A brand-new comic sequel story to the award-winning game by Guerrilla.

Aloy and Talanah return! Nature has reclaimed the planet. Awe-inspiring machines dominate the land, as humanity fights for survival on this new Earth. Co-created by one of the writers of the Horizon Zero Dawn game – Anne Toole. Horizon Zero Dawn FCBD #0 ties into this brand-new #1!

In the vein of Alan Moore and Kevin O’Neill’s The League of Extraordinary Gentlemen! Perfect for fans of Sherlock and detective fiction!

RIVERS OF LONDON THE FEY AND THE FURIOUS TP

A new story in the bestselling urban fantasy series, from creator Ben Aaronovitch!

Wizarding cop Peter Grant is called to investigate an illegal street-racing ring – but can he find the finish line in fairyland? Rivers of London is being adapted into a major TV series by Simon Pegg & Nick Frost.

Season 3 of Star Trek: Discovery is rocketing farther into the future than Star Trek has ever gone before! Explore interviews with the Discovery cast, plus features on far-future tech, as well as the latest on Star Trek: Picard, Star Trek: Lower Decks, and more.

This deluxe edition collects the stunning artwork from the first four chapters of the Disney+ smash hit, highlighting the characters, creatures, allies, enemies and environments of this all-new Star Wars story.