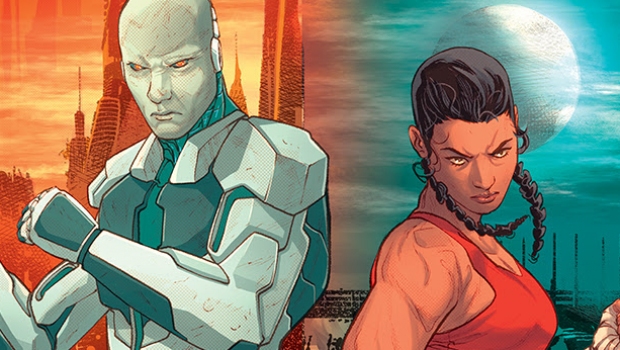 Top Cow Launches “Metal Society” in which every human deserves a fighting chance!

In a future world of robots, extinct humans have been brought back to life – but will they earn their place in society, or will have to fight for it. The forthcoming Top Cow/Image sci-fi mini series — METAL SOCIETY — by Zack Kaplan (PORT OF EARTH, ECLIPSE), Guilherme Balbi, Marco Lesko, and Troy Peteri — explores just that with a side of MMA-Style sport fights.
In METAL SOCIETY, the creators take readers into an inverted future, where evolved robots resurrected humans for manual labor. But, a tribalistic cultural clash breaks out, causing a fearless human fighter and a frustrated, displaced robot to square off in a public fight of epic stakes.

Creator Zack Kaplan says, “While our own technology, our politics and our world are changing faster than ever, sadly our society seems to be responding with aggression and hostility. We’re resorting to tribalism and we’re allowing our differences to be aired out publicly for entertainment value. I’ve always been inspired by great robot stories that remind us of our own experience, and I thought that by exploring this Rocky-style fight drama in a futuristic robot ruled world, this charged robot vs human culture clash, and the ‘human’ fighters that get pulled into these public battles, we might just learn something about our own humanity and our social conflicts today.”

Paired with newcomer artist Guilherme Balbi, they created a rich world in which readers can suspend disbelief and put themselves into the story. Balbi commented, “Creating a new world is always a big challenge, and even getting bigger because everything with “robots” is even more difficult, but that’s exactly what makes this world so special. There are many details, wires and many, many gears. I try to get a lot of inspiration from movies and references, and mix with the things I like. Understanding Zack’s vision for this project was very important to take another step in my growth as an artist, but in this work I took flight.”

“I thrilled to be doing another hard sci-fi series with Top Cow, and if you are not familiar with impressive artist newcomer Guilherme Balbi and incredibly talented colorist Marco Lesko, well, get ready, because they are an awe-inspiring duo that just energizes and brings life to each and every page of this comic,” added Zack Kaplan.