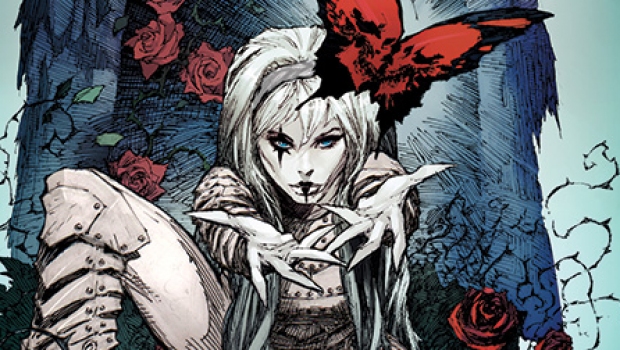 Top Cow has provided C4S with their June 2017 Solicitations.

September Mourning has no past that she can remember, only a strange and shadowy present filled with the voices of the dead. Turned into a unique hybrid by the former Reaper of the lonely, injured, and abused, September Mourning is the only human/reaper to exist. Tasked with reaping the souls of the “worthless” by her mysterious tattoo, September hides and protects them until she can help them realize the last thing they had left undone in life. Whether it’s aiding souls to expose abusers, find lost loves, or settle old debts, in each case September is guided by voice of the Skullfly, which only she can hear.

Will WWIII start over the Russian-Estonian invasion? The incumbent president is caught in a scandal, and it looks like a religious ideologue will win the White House. How does Turkey play into the future of NATO’s plans?

This could be the most prescient and frightening issue of THINK TANK so far!

As the sun sets on the second arc, secrets are revealed about the mysterious men who don’t burn in deadly sunlight. But as Cielo infiltrates her father’s company for answers and Bax tries to escape a war zone full of armed soldiers, both must decide which side they’re truly on.

That which should be bound has been freed, and that which needs to fight has been detained. Demons may have us in numbers, but God’s on our side. Our first testament ends here.

Sam kidnaps the CEO of Northlock Industries, a massive military industrial complex company that’s linked to the president, and begins her plan to take him down.

She comes to terms with the fact that it may very well be a suicide mission.

JUNE 28 / 128 PAGES FBI Agent Chris Bremble comes face to face with Isaac Shiffron, the sociopath who gave birth to Eden, and to find the truth of the past, Bremble will have to endure Isaac’s madness. Laura puts Mark in charge of Eden to see if her son has the ability to lead a town full of criminals who don’t trust or believe in him. His mother, Maggie, and Molly all have a vision for what Mark should be…but which path will he choose?

The Origin of Stjepan Sejic’s SUNSTONE →