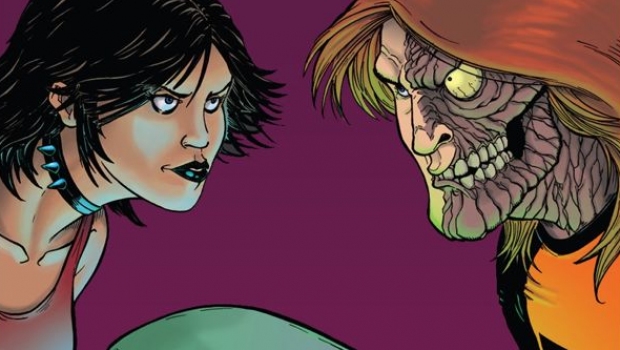 Just in time for the last leg of October, ComiXology is offering up a slew of Halloween Man comics! Featuring more zombies, vampires, mad scientists, and killer robots than even the coolest ghoul will know what to do with!

Subscribers to their Unlimited service can now enjoy monster mash-ups “Hack/Slash vs. Halloween Man” and “Halloween Man vs. the Invisible Man.”

ComiXology Unlimited subscribers can then slink over the Halloween Man ongoing series and take in issues 1-9!

Long-time Halloween Man fans can rejoice that the October issue is now on ComiXology as well! It’s a Satanic Slobberknocker as our heroes take on a vile cult on their own turf. This issue has it it all! Lucy vs Robo-Satan! The fate of Man-Goat! And Halloween Man vs. the Devil himself! This exciting issue of Halloween Man features art by John Sowder(Femme Force), a new cover by Terry Parr(Aerobicide), and a brand new Lucy Chaplin pin-up by cheesecake master Riccardo Desini(Manifest). Get right on this one true believers for seasonal fun.