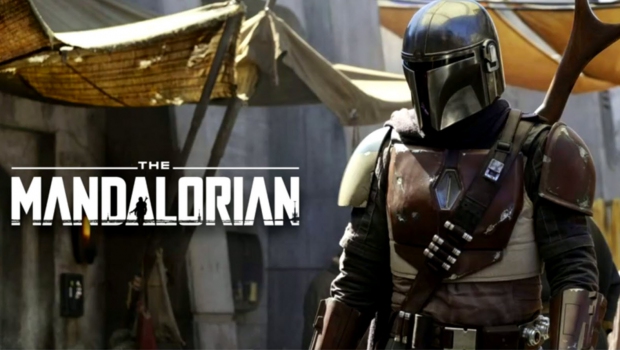 “My favourite thing about THE MANDALORIAN: they broke with recent Star Wars tradition and made it good.” – Comic Book Creator Blake Northcott on Twitter.

The show opens with our titular hero walking into a bar, in the freezing cold where he comes upon Mythrol (Horatio Sanz) getting the crap beat out of him. He proceeds to rescue the poor amphibious creature only to take him away as bounty. Upon delivering his bounty, he’s sent on a dangerous mission to Arvala-7 for the purpose of obtaining an important bounty. Upon landing, he’s attacked by a strange creature called a blurg. He’s rescued by a vapor farmer named Kuiil (Nolte) only to learn that he will have to ride the creature that tried to eat him in order to obtain his bounty.

Here’s another western disguised as Science Fiction. This series has the Steve McQueen classic Wanted Dead or Alive with elements of Kung-Fu all over it. I’m positive that Jon Favreau has seen every episode of that show. The opening theme even has a hint of The Good the Bad and The Ugly. Though it’s vastly inferior to Ennio Morricone and has somewhat of an EDM vibe to it. This is a great introduction to our bounty hunter hero who looks like a cross between Judge Dredd and Boba Fett. Like Dredd, Dyn Jarren never removes his helmet, at least not in the first episode. The opening scene is a classic barroom brawl and a lot of fun. The show is set five years after the defeat of the galactic empire and we get subtle hints that their influence has been completely destroyed, like when a character tries to pay for product with Imperial money and Jarren appears to be insulted by the offer, like the money is no good anymore. Jarren’s personality gets fleshed out and we get the sense that he’s a loner that detests modern technology, when he orders a land speeder and a brand new one pulls up with a yellow R2D2 type as a pilot he responds, “no droids” then an old junker pulls up with a humanoid pilot, which he readily accepts. The performances are fine all around and I was glad to see Carl Weathers back as Greef Karga, the one who sends Jarren on his mission. He still looks good and I hope his role gets beefed up in upcoming installments. There’s something for everyone here, the strange alien creatures, the badass protagonist, and even a young…Nah, no spoilers, gotta watch it for yourself. I haven’t had this much fun watching a Star Wars episode since Rogue One. I can’t wait for the next installment. The end has a neat little twist that will make us wonder what’s coming up next. Jon Favreau is obviously a Star Wars fan and puts some good work in this episode. Unlike other filmmakers who simply want to bastardize the franchise to push their political views. Here’s hoping that this series will only get bigger and better. I loved the first episode and the setup promises it could be a fun show. ***1/2 (8.7 rating)

Creator: Jon Favreau Based on Star Wars by George Lucas