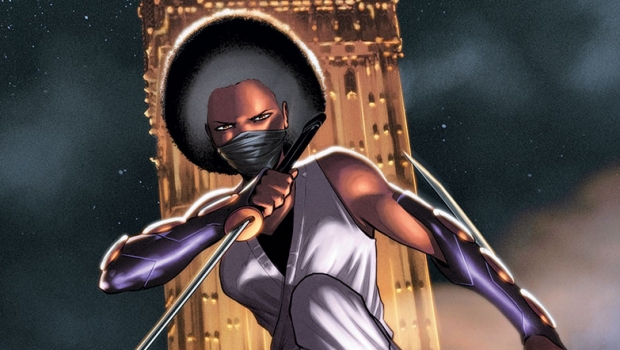 At the height of 1970s Britain, MI-6’s covert “Ninja Programme” has just activated its first female agent: NINJA-G! As financial instability grips the nation and anarchy brews in the streets, can MI-6’s newest ninja recruit counter a steady tide of double agents, double crosses, and dueling nation states that will take her from the leather-padded corridors of London to the most severe corners of the Soviet Bloc? The life expectancy of a ninja agent is never long…but just how and why are NINJA-G’s missions still impacting Ninjak’s deadly manhunt in the modern day? And could her legacy hold the secret to decoding the murders of the Ninja Programme’s last surviving members – before Colin King is scratched off the list once and for all?

Eric Heisserer, the Academy Award-nominated screenwriter of ARRIVAL and Valiant’s upcoming HARBINGER and BLOODSHOT feature films, joins the Harvey Award-nominated art team of Raúl Allén & Patricia Martín (WRATH OF THE ETERNAL WARRIOR) for an all-new Valiant adventure…launching Livewire and an extraordinary new team of heroes into the fight of their lives!

Two millennia from today, Earth is not the hospitable home we once knew. Ravaged by an endless onslaught of war, disaster, and time, the world is littered with desolate badlands, fortified kingdoms, and secretive enclaves where humanity still clings to life… Enclaves like The Grove – Earth’s last known repository of scientific knowledge and bioengineered prosperity. Now, under the leadership of the lone protector called WAR MOTHER and her sentient sniper rifle, the denizens of The Grove face a critical choice: remain where they are and die, or find a new land and flourish. Can War Mother lead her people out of isolation and reignite the fires of a dying planet? And even if she can locate the distant citadel she seeks, can she fight back the horrors and perverse monstrosities that lurk just beyond her doorstep?

BLOODSHOT SALVATION #6 (NEW ARC! “THE BOOK OF THE DEAD)

ALL-NEW ARC! ALL-NEW JUMPING-ON POINT! “THE BOOK OF THE DEAD” – PART ONE!

Into the Deadside! Years ago, Project Rising Spirit’s cutting-edge nanite technology transformed Ray Garrison into the walking weapon codenamed Bloodshot. Now, those very same microscopic machines have infected his infant daughter’s physiology and threaten to destroy her from the inside out. As the life of an innocent hangs in the balance, Bloodshot will be forced to make an unimaginable decision: to watch the child he loves die, or to confront death itself…and strike a bargain for her safety. Now, with the supernatural heroes known as Shadowman and Dr. Mirage to guide him, Bloodshot is about to undertake an unreal journey into the demon-haunted dimension known as the Deadside to save a life…or sacrifice his own…

Because you demanded it! The Goat returns!

If you add them all up, this would be Quantum and Woody’s 50th issue! What better time to answer the eternal question: “Whatever happened to the Goat, anyway?” At last, the whole saga of Dr. Derek Henderson’s transformation from brilliant physicist and beloved father into a barnyard animal of unimaginable power can finally be told…and all of his secrets revealed, beginning with the long-awaited birth of the Goat’s baby!

And the Eisner for “Best Goat Birth Scene” goes to…writer extraordinaire Daniel Kibblesmith (The Late Show with Stephen Colbert) and special guest artist Francis Portela (FAITH)! Don’t miss the staggering spectacle as the entire Valiant Universe stands on the cusp of a milestone moment in the spectacular goatacular of 2018!

Left for dead by a mercenary band of bounty hunters far more twisted and devious than any enemy he’s faced before, Aric of Dacia has managed to cling to life…and a thirst for revenge. Now, his campaign of retribution against those who have wronged him can begin in full force…and, when the dust settles, the alien world of Gorin will rue the day it ever brought the savage sword of X-O Manowar crashing down upon it…

From the minds of master storyteller Matt Kindt (ETERNITY, Dept. H) and astonishing artist Ryan Bodenheim (The Dying & The Dead), the sci-fi comics juggernaut of 2018 reaches a pounding crescendo as “VISIGOTH” launches Valiant’s iconic hero into an intergalactic battle of will and wanton ferocity!

He betrayed his friends. He betrayed his country to save us all… In the wake of NINJAK VS. THE VALIANT UNIVERSE’s stunning digital debut – coming this winter to digital devices everywhere – get the full story behind the head-to-head showdowns, hero-on-hero collisions, and epic consequences that await as Ninjak goes it alone against a gauntlet of the Valiant Universe’s biggest and most beloved icons! Watch the live-action, episodic series… Then follow the action directly onto the comics page with extra-added action, intrigue, and revelations behind Ninjak’s grueling firefight against Valiants’ most indelible heroes – with red-hot creators Eliot Rahal (The Paybacks) and Joe Bennett (Deathstroke) calling the shots!

ARMSTRONG AND THE VAULT OF SPIRITS #1

What secrets await inside the Vault of Spirits?

Deep beneath New York City’s seediest dive bar, Armstrong – the hard-hitting, harder-partying immortal veteran of history’s greatest escapades – is hosting an invitation-only affair for his most beloved friends and allies! Archer… Ivar, Timewalker… Faith… Quantum and Woody… And special guests from across the Valiant Universe… All have been offered a seat at the table for a personally guided tour of Armstrong’s most valuable and tightly guarded treasure… From the Great Flood to ancient Greece to the height of the Crusades, raise a glass as Armstrong recounts the true stories of his wine-soaked path down through the ages and the artifacts that reside within his own secret archive!