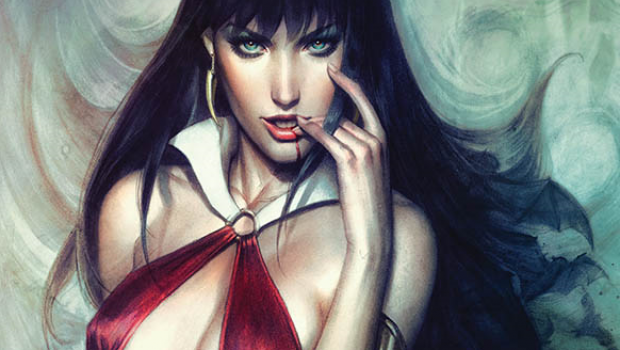 Mike The Pike Productions, Inc. (OTC:MIKP) Announces today that its subsidiary Arowana Media Holdings, Inc., (https://www.ArowanaMedia.com) a media holdings company with a focus on transcendent storytelling across film, television, digital media, and other entertainment mediums, has acquired the worldwide film/television/streaming rights to Dynamite Entertainment’s (https://www.dynamite.com) ‘Vampirella’, including stories, characters, and derivative works of the Vampirella universe.

MIKP CEO and Producer Mark B. Newbauer states, “We are thrilled with the opportunity to bring this amazing character to screen in a big way. Nick Barucci, founder and CEO of the prolific Dynamite Comics, is an incredible visionary with an eye for story, and a talent for integration into the zeitgeist.”
“He and everyone at Dynamite have resurrected this character in a significant way over the past decade and this latest run with Priest feels like it’s just the beginning of her next 50 years and beyond. We are truly grateful for the faith and support of Dynamite, Nick, and their reps, including producer/manager Ford Gilmore of Illuminati Entertainment.”

“Vampirella has become (and as of 2021 remains) the longest-running English-language vampire comic book of all time, its latest run, helmed by Christopher Priest (Black Panther), is its most successful yet, with more issues sold in its 50th anniversary than any previous year and it continues to gain momentum in popularity as new readers discover Vampirella’s timely storyline.”

As Priest stated upon launch of the highly successful 2019 and ongoing series: “Vampirella’s supernatural abilities are a metaphor for a universal human condition, for being either rejected or idealized (or, in the case of our series, both) because you are different. Anyone who’s ever moved to a new town or a new school or taken a new job should be able to identify with Vampi’s challenges.

Anyone who wears their hair a different way, listens to a different kind of music, embraces a different religion, anyone who steps outside of or gets shoved outside of the so-called “mainstream” can identify with this latest run on Vampirella. I hope it is precisely this universality of theme that helps broaden her audience; the Vampi tent is large enough for everyone.”

Over the years and in different publishing incarnations, Vampirella has clashed with Dracula; dodged the murderous intentions of Conrad van Helsing, and fell in love with his son, Adam van Helsing; had some “issues” with her mother Lilith (wife to biblical Adam before Eve was in the picture); took a young punk runaway, Sofia Murray, under her wing; and tangled with Fattoni, a sadistic Mafia boss.

Vampirella has also made a number of high profile crossover appearances in some of the biggest franchises around: Aliens, Catwoman, KISS, Witchblade, Red Sonja, and Archie Comics – a testament to her vast appeal and amazing versatility!

The Feature will be Produced by Mark Newbauer of Mike The Pike, Nick Barrucci and Juan Collado of Dynamite Entertainment.

The deal for rights was negotiated by and between Joseph Lanius of Lanius Law & Associates for Mike The Pike Entertainment and John Michael Murray of Behr Abramson Levy with Charles Ferraro of UTA and Ford Lyttle Gilmore of Illuminati Entertainment for Dynamite.