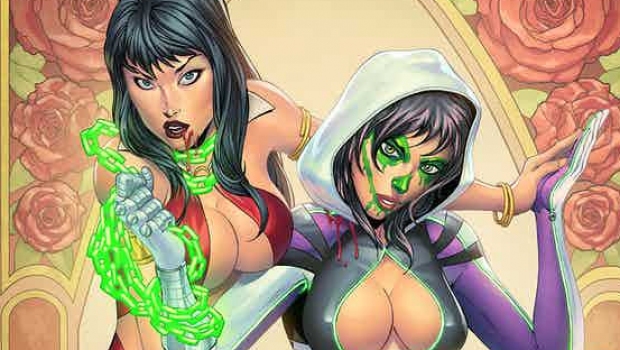 The biggest surprise crossover of the year is here! Marat Mychaels and Dynamite are teaming up and pairing their biggest characters for Vampirella / Prey for the Sinner – only available right now on Kickstarter!

Marat Mychaels is a 30-year veteran of the comics industry, starting out as an aspiring pro artist working by day at the legendary Golden Apple Comics in Los Angeles. There at some massive launch parties toward the kickoff of Image Comics, Marat would connect with Rob Liefeld. Under Liefeld’s wings, Marat moved up the ranks of Extreme Studios and became one of the Deadpool creator’s most reliable and talented collaborators. Since then, Marat has contributed to titles like X-Force, Hawk & Dove, Grifter, Deadpool, and others.

Today Marat focuses on publishing his own original titles and engaging more directly with his dedicated fanbase. His titles like Notti & Nyce, Pooh, and more cover action, parody, and a reverent take on the explosive styles of the 1990s. No title is bigger than Prey for the Sinner – starring Marat’s beloved bad girl heroine Syn!

In the new special limited comic, Syn is rocketing through the galaxy for vengeance against her enemy Zyzz. But when he lands and hides on a mysterious planet by the name of Drakulon, Syn will have to team up with a powerful vampire-like alien heroine against their common foe. All to stop the cataclysmic doomsday virus that Zyzz has from being released.

In addition to the story by Marat, he’s even doing interior artwork on the stunning opening chapter! Jaime Mendoza inks the chapter. They’re joined by scripter Chad Bowers, with quick wit and experience on major titles like Deadpool and GI Joe. Artist Sajad Shah is a favorite from his action-packed covers on Teenage Mutant Ninja Turtles, and is the perfect match given he’s the current ongoing Prey for the Sinner artist and has drawn Vampirella before! Colorist Mirza Ananta Wirwan rounds out the crew.

Both Counterpoint and Dynamite are known for their diverse range of gorgeous variant covers, and this crossover necessitates that same level of artistic excellence for the fans! Marat himself contributes not one, but TWO covers for fans. One featuring both stars and another highlighting just Syn. Sajad Shah gives fans a taste of his interiors with a great shot of the dynamic duo. Superstar Eric “eBas” Basaldua turns the spotlight on Vampirella for a flirty cemetery scene. Dan Mendoza brings his beloved cartoony style that has made Zombie Tramp a hit. Last but certainly not least, Ryan Kincaid comes in with a risqué cover that we can’t even show right here, so fans will have to head to the Kickstarter!