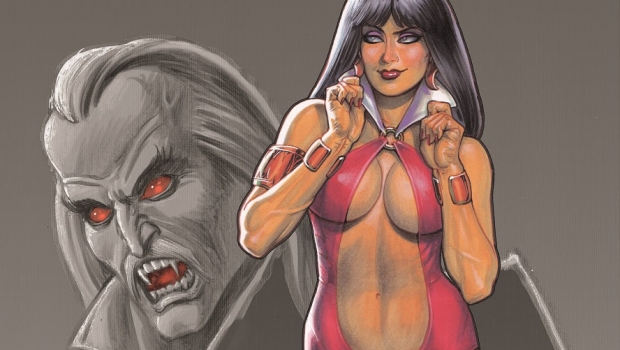 Dynamite announces a duo of romantic special one-shots for February, starring its flagship heroines, Red Sonja and Vampirella. Fans will think Cupid is hiding in their pull list!

The She-Devil With a Sword celebrates the season in a special story by Bill Willingham (Fables, Robin) and Giuessepe Cafaro (Catwoman, Suicide Squad). The creative duo reunites following their collaboration on the Vampirella: Trial of the Soul one-shot that featured the first appearance of Prester John.

Sonja is faced with the ultimate dilemma, as her arch-nemesis, Kulan Gath is suddenly… her greatest admirer? Is there more at play here than her eyes can see? Sonja will face her greatest challenge resisting the urge to kill a love that can not die.

In addition to the perfect fit of Joseph Michael Linsner for a cover, and a cosplay photo from Savannah Polson, Jimmy Broxton joins with a genius cover homaging the classic romance comics of earlier eras.

Over in a terrifying alternate reality and Vampirella’s special, the Daughter of Drakulon has married Dracula and the world faces a dark crisis like no other. The king of the vampires has subjected humanity to cattle for his people, and his bride has sworn a sacred oath to him. However, hope survives with a rebellion brewing in the shadows. Who is the mysterious Bloodwing and why does Dracula fear her so much? And will she return in future stories? (Yes!)

Sniegoski added, “Working on any Vampirella project is something that I absolutely adore, but the Valentine’s Day special, with the addition of Jeannine Acheson’s talents and Marco Ramo’s amazing art, have made this one of my favorite Vampirella projects that I’ve worked on ever—and that’s saying a lot! I can’t wait for people to see it.”

Linsner checks in for a cover on this issue too, completing a perfect set for collectors. Fan-favorite artist Gene Ha (Top 10) depicts a seductive yet threatening Vampi on his cover, and Sarah Stalcup features on the cosplay cover.