Get to know the Vamp, ..." /> Vampirella Vampiverse Showcases 1930s The Vamp - Comics for Sinners 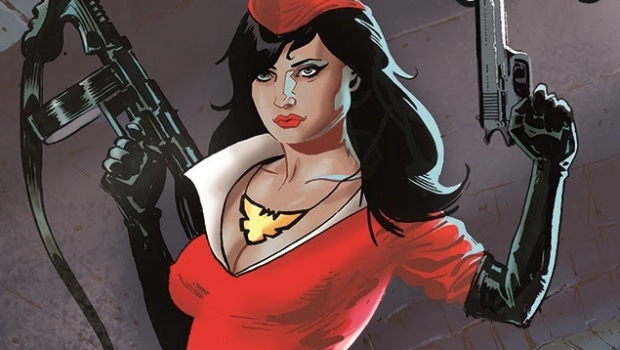 Get to know the Vamp, as the sensual pulp variant of the Daughter of Drakulon stars in a new one-shot this June.

Writers Tom Sniegoski, Jeannine Acheson, and artist Daniel Maine expanded the multiversal web of Vampirella in their hit event series Vampiverse this past year. Fans of the most beloved vampiress in comics got to meet countless alternate universe and timeline iterations of their favorite. A couple really stood out amongst the rest though, and The Vamp kicks off the first full spotlight.

The Vamp is a mysterious crime fighter in a 1930s pulp world. Now her full origin will be revealed. Where did she come from? As well as how she established her reputation and became the scourge of all things evil. Even in this world, the infamous Cult of Chaos exists, and she may even have a surprising connection to them…

Writer Jeannine Acheson shared, “The Vamp was definitely one of the characters that stood out to us as we wrote the Vampiverse mini-series. She was one of the more ‘fleshed-out’ Vampirellas — taking on a life of her own as soon as she appeared — so Tom and I are really excited to re-visit her in this issue!”

“I’m a huge fan of the pulps (The Shadow, Doc Savage, The Spider) and getting a chance to write a Vampirella with that kind of crazy, over-the-top storytelling is something that I can’t wait to do,” said writer Tom Sniegoski. “There’s even a talking orangutan butler, for Pete’s sake!”

The same fan-favorite creative team returns, and invites fans to join them this summer for a titanic tale of terror, action, and adventure that will both further expand the Vampirella mythos and stand on its own as a thrilling one-shot.

A trio of tantalizing covers tops this beautiful book. Jimmy Broxton is known for his pulp stylings and recent risque covers for Dynamite, and he brings that same energy to the Vamp. German Garcia contributes a stunning cover flush in Vampi’s signature red, evocative of classic pulp covers and more. Cosplayer Rachel Hollon also delivers another of her classic shots. Dynamite is also offering a blank sketch cover for this title, as fans and artists will want to portray their own artistic takes on this breakout character.

VAMPIVERSE PRESENTS: THE VAMP #1 is solicited in Diamond Comic Distributors’ April 2022 Previews catalog, the premier source of merchandise for the comic book specialty market, and slated for release in June 2022. Comic book fans are encouraged to preorder copies of the issue with their local comic book retailers. It will also be available for individual customer purchase through digital platforms courtesy of Comixology, Kindle, iBooks, Google Play, Dynamite Digital, ComicsPlus, and more!