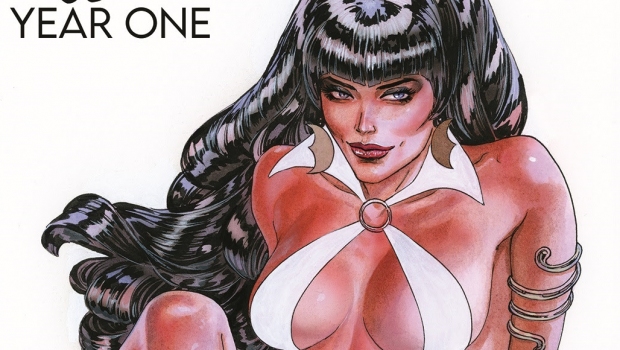 In July 2019, the boundary-breaking and acclaimed Christopher Priest kicked off Vampirella’s 50th anniversary celebration. Now, three years later the next chapter begins – by going back to the beginning! Vampirella: Year One debuts this summer.

This limited event series is not only an exploration of the Daughter of Drakulon’s earliest days, but also a follow up to the explosive conclusion of Vampirella / Dracula: Unholy. Our vampiress is now wanted for murder, with every demon, vampire, whack-job zealout, reporter, and law enforcement officer on Earth hunting for her. As she takes refuge hidden away, Vampirella begins to recall and question how and why she came to this planet in the first place.

Priest shared, “I’m actually a bit surprised this hasn’t been done before. There are vast areas of Vampirella’s life, especially her childhood on Drakulon, which remain largely unexplored. Half our series will be a kind of ‘pilot’ episode to gauge interest in artist Ergün Gündüz’s amazing reinterpretation of Drakulon and the new history we created during our ‘Interstellar’ story arc in Vampirella #18-21.”

“The remaining issues will take an odd turn on the E.T. story, examining the plight of many refugees who come to America seeking asylum and freedom. Vampirella leaves Drakulon on a mission of mercy, unaware that, due to the crude state of Earth technology, it will be a one-way trip.”

“Stranded in a strange land, Vampi is a literal illegal alien, immigrant and lost soul in 1969 New York City–a far more dangerous city than it is today. Vampirella does not understand our language, our culture, our politics. We land her squarely back in the pages of her original Warren Publishing book, with cameos from some of the original cast. The book is a lot of fun while also exploring important themes of who we are as Americans and how to live up to our core values.”

Artist Giovanni Timpano returns to illustrate the present-set framing sequences. For the core tale, Priest is reunited with Ergün Gündüz after the pair started the whole run back on Free Comic Book Day 2019. Letterer Willie Schubert continues to contribute as well. Together, the creative team is overhauling and expanding the classic origin story from Forrest J. Ackerman and Tom Sutton that originally amounted to just a handful of pages.

Dynamite invites readers to travel to the scenic, exotic sites of Drakulon, and then back in time to 1960s New York City, where Vampi finds herself grappling with depression and intense loneliness as she attempts to build a new life.

Through the series she will meet her first friends like the fan-favorites Pantha and Pendragon, as well as her first enemies. She’ll also be navigating the turn of the decade amidst one of America’s most turbulent periods. Grab your go-go boots, Afro Sheen, and love beads!

The “Year One” moniker is one of the classic hallmarks of superhero and adjacent comic books. Priest, Dynamite, and the whole team intend to deliver an indispensable and precedent-setting story that will have fans anxiously awaiting each and every new chapter.

A legion of unparalleled artists contribute covers to further solidify the history-making nature of this benchmark saga. Collette Turner is here, adding to her stunning pieces from Priest’s Draculina title. Dynamite fave Lucio Parrillo is here of course, continuing his remarkable covers. Guillem March returns, as he helped kick this whole Priest era off too. Derrick Chew and Joseph Michael Linsner depict a young Vampirella that fans have rarely ever seen. Rachel Hollon makes history as the first cosplay cover with the white costume. And a limited incentive cover features the jaw-dropping pencils of Kevin Nowlan.

VAMPIRELLA: YEAR ONE #1 is solicited in Diamond Comic Distributors’ May 2022 Previews catalog, the premier source of merchandise for the comic book specialty market, and slated for release in July 2022. Comic book fans are encouraged to preorder copies of the issue with their local comic book retailers. It will also be available for individual customer purchase through digital platforms courtesy of Comixology, Kindle, iBooks, Google Play, Dynamite Digital, ComicsPlus, and more!