Warlord of Mars #100, a Celebratory Landmark Special Issue In Stores In April 2014 - Comics for Sinners
News 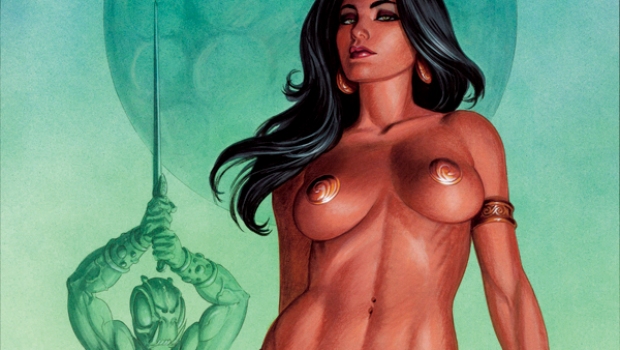 The Warlord of Mars comic series approaches a milestone — nearly one hundred issues have been released to date by Dynamite Entertainment. To celebrate that incredible feat, Dynamite will be releasing a special celebratory Warlord of Mars #100! This special squarebound issue is written by three key Warlord of Mars writers, with multiple stories by Arvid Nelson, Robert Place Napton, and Mark Rahner. Featuring a who’s who of today’s best comic artists, Warlord of Mars #100 features covers by joseph Michael Linsner, Jay Anacleto, Fabiano Neves, Emanuela Lupacchino, and Stephanie Buscema. Also featuring special bonus material, this is a must-read for Warlord of Mars fans! This comic can be found in comic book stores and also can be read digitally this upcoming April.

In Warlord of Mars #100, we begin with a story by Robert Napton (Warlord of Mars: Dejah Thoris), taking place 400 years before John Carter’s arrival on Barsoom, where a young Woola discovers an ancient First Born artifact that isn’t quite what it seems. The story continues by Arvid Nelson (Warlord of Mars), as the artifact is recovered by the Warlord himself many years later. What happens to the good people of Helium as the evil power begins to be unleashed? And what could it mean for the rest of Barsoom? Then, in the final chapter by Mark Rahner (Dejah Thoris and the Green Men of Mars), Woola must do the hardest thing of his life: not protect John Carter. The fiercely loyal calot must resist his strongest instincts to save Carter from horrifying brutality – or pay an infinitely worse price.

“Having been with Warlord of Mars from the very beginning, this issue has deep personal meaning for me,” says writer Arvid Nelson. “Our goal from the start was to capture the spirit of the original stories, but also make them accessible for a modern audience. I’m proud of what we accomplished.”

“It’s an amazing milestone for Dynamite and the Warlord of Mars comics that we’ve reached our 100th issue,” states writer Robert Place Napton. “It’s a testament to the rich world Edgar Rice Burroughs created that we’ve come this far. I can’t think of a better way to celebrate than throwing all the storytellers into the arena together and seeing what kind of mayhem ensues. It should be fun!”

“I’ve loved John Carter’s adventures since I was a kid, and being a part of the 100th issue makes me feel like my life’s come full circle,” adds writer Mark Rahner. “So I need to go on a pilgrimage to the River Iss and be devoured.”