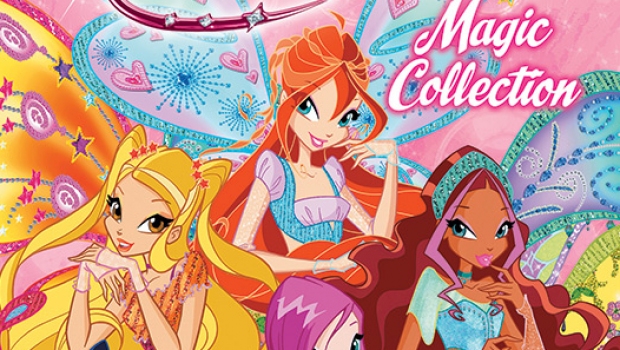 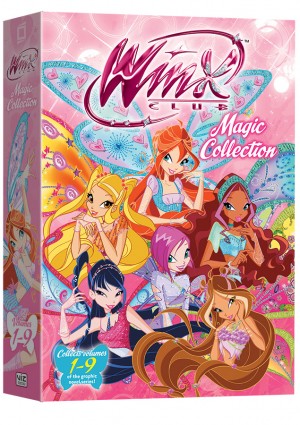 WINX CLUB: MAGIC COLLECTION runs more than 800 full-color pages and will be published under VIZ Media’s Perfect Square imprint, is rated ‘A’ for All Ages, and will carry an MSRP of $19.99 U.S. / CAN.

WINX CLUB is based on the smash hit property created by Iginio Straffi and inspired by the animated series that is widely seen on Nickelodeon Junior. The graphic novels follow the magical adventures of best friends – Bloom, Stella, Flora, Musa, Tecna and Aisha – who attend Alfea, a school for fairies in the amazing dimension of Magix. With powers drawn from sunlight, science, music, nature and flame, the girls learn together even as they regularly battle their rivals, a trio of witches known as The Trix.

Before Bloom became part of the Winx Club, she was living a normal teenager’s life. All that changed one day when she discovered she’s actually got magical powers! Between enrolling in Alfea School for Fairies and learning to control her newfound powers, Bloom’s life is anything but ordinary now. Luckily, she’s got special fairy friends who encourage and support her – and help fight against wicked villains!

“WINX CLUB is a unique adventure property that strongly resonates with fans, and we are delighted to offer their graphic novel adventures in this new omnibus edition,” says Beth Kawasaki, Senior Editorial Director. “The Winx fairies are all about friendship, fashion and fun. As they battle unpredictable monsters and the trouble-making Trix witches from Cloudtower Academy, they become stronger fairies and closer friends. Join Bloom and the rest of the WINX CLUB fairy crew for their action-packed escapades in this new full-color release from Perfect Square!”

Iginio Straffi is the founder and CEO of Rainbow Group, as well as creator of its most famous property, the Winx Club. Born and raised in Italy, Straffi initially began as a comic book artist for Italian publishers Comics Art and later Sergio Bonelli Editore, where he worked on the Nick Raider series. At the age of 27, he moved to France to work on production and storyboarding and went on to direct several animated TV series and feature films. Following that, he returned to Italy and founded the Rainbow Group animation studio. Winx Club debuted in 2004 and became a worldwide success, now broadcast in over 130 countries and available in all major markets in the U.S. on the Nickelodeon network.

VIZ Media’s Perfect Square imprint focuses on delivering original comics, manga, graphic novels and other children’s books with an emphasis on strong storytelling, eye-popping graphics, empowering themes, and a dash of irreverence, that captures the imagination of a whole new generation.

Additional information on titles published by Perfect Square is available at www.PerfectSquare.com.

For more information on other manga titles from VIZ Media, please visit www.VIZ.com.