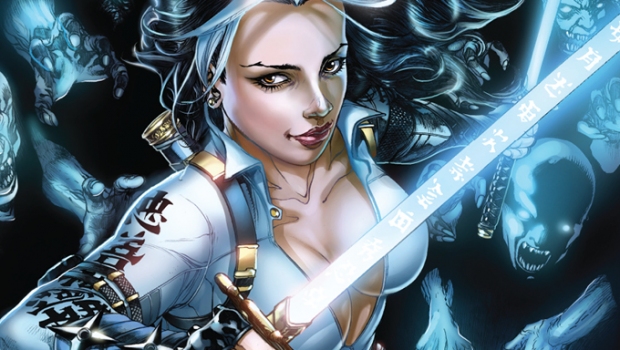 Zenescope Entertainment has provided C4S with info on their titles to be in stores June 6, 2013.

The darkest corner of the Grimm Universe is revealed in this brand new UNLEASHE D mini-series!

When demonic spirits begin possessing innocent people with disturbing frequency, the mysterious Japanese warrior, Masumi, must find a way to banish the evil forces without harming the hosts. However, as she journeys deeper into the heart of evil, Masumi notices a dark pattern to the demonic activity that threatens to swallow
her whole.

Jungle Book Last of the Species #4

The action/adventure series that has critics and fans raving about continues!

As Bomani and Dewan form an uneasy alliance to search for Kaa the Python, the Tigers of the Shere and the Payari Elephants move closer to their final confrontation. But deep in the caverns under the Isle of Kipling, Mowglii uncovers terrifying secrets and monsters that will turn the tide of the upcoming war and change the jungle forever more.

A young woman awakens in a hospital covered in scars as if she had been taken apart and put back together again. Her mind is as fragmented as her body, leaving her delusional and seeing monsters everywhere. Is this the work of a serial killer, or something far worse? FBI Agent Erin Scott intends to help her find out, with or without the approval of her superiors in this visionary modern, mature re-imagining of the Frankenstein legend from acclaimed artist/creator Tyler Kirkham ( New Guardians, Teen Titans, and Amazing Spider-Man).

An unsuspecting woman named Britney, aka Red Riding Hood, learns of her highborn heritage and finds herself entangled in a war between the gods themselves… Before she was the Goblin Queen she was a small child whose anger and pain would lead her to discover a greater power hidden within… The origin of one of the most evil Highborns in the Grimm Universe, the Dark One is finally revealed!

These stories and more are all collected together in the trade that spotlights the backstories of Heroes and
Villains of the Grimm Universe.

Start reading from the very beginning of Zenescope Entertainment’s longest running series with this massive collection.

Experience the uniquely twisted fairy tales from the minds of Joe Brusha and Ralph Tedesco!
Follow the heroine Sela as she uses the classic tales of old to lead modern day men and women to the right choices while combating the lure of evil.