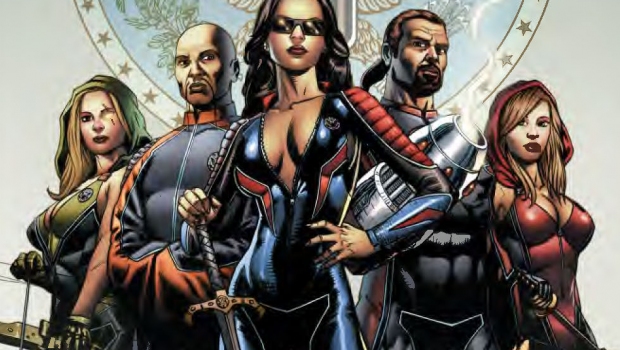 Zenescope Entertainment has announced plans to bring together a cast of its most popular Grimm Universe characters for the upcoming mini-series which will be entitled Realm Knights. The company best known for re-telling classic stories with a unique blend of horror, tongue-in-cheek humor and great action, is bringing out its heavy hitters for this brand new four issue mini-series that teams up its fan-favorite characters such as Robyn Hood, Van Helsing, Red Riding Hood and Sela Mathers. Together the group forms the Realm Knights, a powerful modern day team of heroes that is chosen to help eliminate daunting supernatural threats against our world.

“It’s a great mix of fantasy, action, horror and humor.” says writer Patrick Shand. “It’s a blast to take these characters out of their separate titles and allow them to come together against common threats while also trying to get along with one other. For Grimm Fairy Tales fans, the elements will be familiar but also feel fresh and different.”

The first issue of Realm Knights is available now for pre-order in Diamond’s June 2013 edition of PREVIEWS and will be released both in print and digitally in August. The #1 issue will feature covers by Anthony Spay, Marat Mychaels, Alfredo Reyes and will also include a unique “suiting up” connecting cover by Anthony Spay that will spread across all four issues of the first mini-series. For more information on Realm Knights or any other Zenescope title, visit www.zenescope.com or follow their updates on Facebook and Twitter.