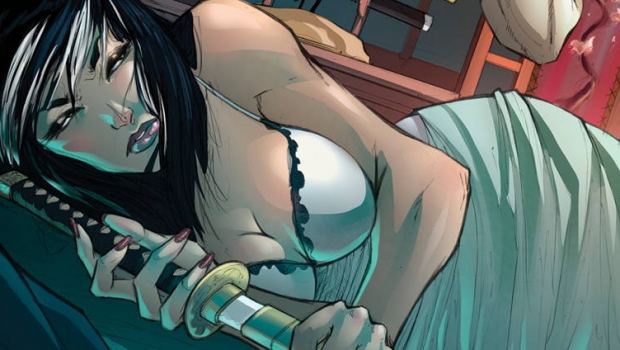 Zenescope is offering intel on their titles, shipping this week on July 10, 2013.

All over the world, zombies are crawling from their graves and feasting on human flesh. Elijah, a time-lost hunter with a dark past, knows that it falls upon him to become the hero he was destined to be. But first, he must solve a mystery rooted in his own past, one that stretches back to the cane fields of 1800s Louisiana. Will Elijah be able to confront and bury the grasping terror of history before it devours him?

The new extreme horror series from the creative team of Godstorm continues, as the silent warrior Masumi wages war against the darkest threat she has ever faced. As demons with immense power continue to use powerless humans as their puppets, Masumi has to choose between accepting her fate as a lone soldier or leaving humanity to fend for itself. The new face of terror rises up as the shadow falls!

Jungle Book Last of the Species #5

This is it! The all-out battle between the Payari elephant, Shere tiger and Bada Dar bear tribes with Mowglii caught right in the middle. Oh my! plus Bomani faces off alone against Kaa the Python! Not everyone will walk away from this battle in one piece as all warring parties collide on one battlefield in the conclusion to the critically acclaimed jungle action series from writer Mark L. Miller!