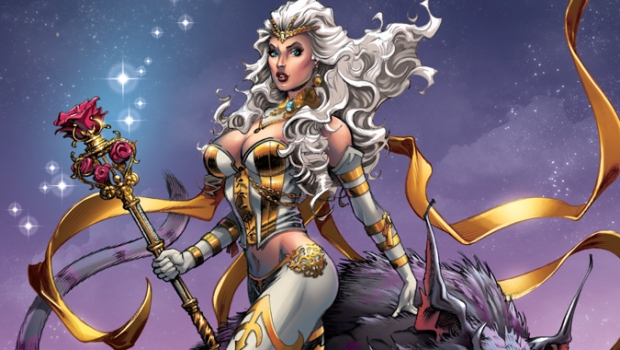 Zenescope Entertainment has provided C4S with a preview to Neverland Age of Darkness 1, Ascension 2, & Wonderland Volume 4 Trade, in stores this Wednesday March 12th, 2014.

Neverland: Age of Darkness 1 of 4

After saving her nephews from the evil Pan of Neverland, Nathan Cross made a life with Wendy, the woman that he loves. However, with the United States government recruiting for their Realm Knights program, it was only a matter of time before they called on Cross for his unique skills.

For over a year, Cross has been acting as a Realm Knight, saving the world from supernatural threats alongside a team of others like him. But as Nathan’s personal life and his new duty come into conflict, will he be prepared when a new evil rises
in Neverland?

The Being leads his new Keepers on a mission to purify the Earth. Wrongdoers face the wrath of a god living among us, while true believers are rewarded for their faith. However, as the Being’s obsession with power grows, how long will it take before this god looks upon all of humanity with fury?

The fourth installment of Zenescope’s ongoing, epic Wonderland series begins as Calie and Violet take the fight to the realm that has been hunting them. As the mother and daughter team begin tapping into the mysterious powers of Wonderland, the deadly duo of the Madder Hatter and Dark Cheshire are sent to murder them. Can Calie keep her daughter safe from the evils of Wonderland, or will they both fall to the realm that claimed the rest of their family?

From the writers and creators who brought you Zenescope’s original Wonderland trilogy comes the ongoing horror and adventure series unlike any you’ve ever seen… Welcome to a world full of madness and terror… Welcome to Wonderland.