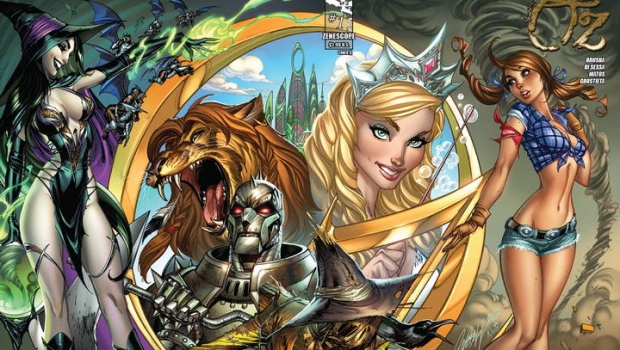 Zenescope Entertainment starts with OZ this week, as well as continuing with Screwed.

At long last the last realm of power in the Grimm Fairy Tales universe is revealed…and there’s never been an Oz quite like this. This modern take on the story reimagines the classic fairy tale in the classic Zenescope style. The Witches of OZ are searching for a lost weapon of power known as the Veridian Scepter. Their quest leads them to the most unlikeliest of places…the farmlands of Kansas and the home of the unlikeliest of heroes…Dorothy Gale. With incredible cover art by superstars J Scott Campbell, Artgerm, EBAS and Ale Garza! The epic Oz adventure starts here.

The carnage continues as Anne’s search for her past leads her to the abandoned meat market where she was found. Slowly her memories begin to filter back to her as she finds information about Project Frankenstein. Meanwhile FBI Agent Erin Scott, Secret Agent Simon and the monstrous Suture are hot on her trail and only one of them has her best interest at heart. Also get a look at the secret Erin Scott is keeping from the world and discover what is the connection between Agent Simon and Suture?

As a ferocious werewolf cleaves its way through the city, the time-lost monster hunter Roman must track it to his quarry… a young girl who has suffered a bite from the wolf. What he doesn’t know is that a secret government facility has taken Charlotte into custody, intent on finding out what makes her tick. Don’t miss the new landmark horror series from Zenescope and Mark L. Miller (Jungle Book)! UNLEASHED tie-in.