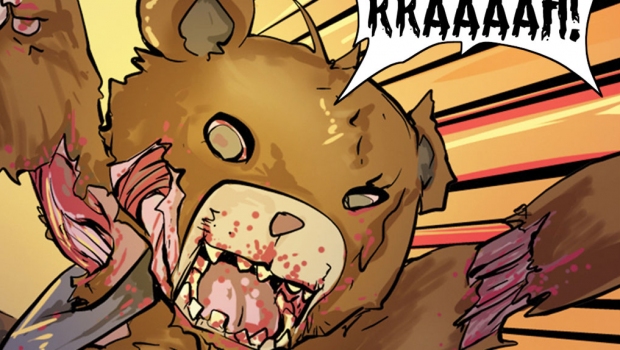 RAAAAAR! Subversive Comics (http://www.subversivecomics.com) are launching a Kickstarter to raise funds for the sixth and final issue of Bearlands: Zombie Bears – Season One.

The comic follows the trials and tribulations of the cigar chomping, samurai sword wielding, motorbike riding Badass as he fights his way across a Zombear infested landscape to bring the bear responsible for the apocalypse to justice. The Zombie Apocalypse has never been so cute.

Filled with sly humour and bags of high octane action, the series is a loving tribute to zombie and action franchises such as The Walking Dead, George Romero’s “… of the Dead” series, Mad Max, Terminator and so on – but with enough of a twist to rise it above its “high concept” (Zombie Bears) premise.

Series creator, writer Jeremy Biggs has his own claim to Zombie films – having worked in the sound department on the Zombies-in-Africa film “The Dead” which went to number 1 in the US horror Blu-ray charts in 2011. To that effect, he’s teamed up with American animator Laura Maue to produce a short animation (www.zombiebears.co.uk) that will give you a taste of the action within the comic. The animation features the voice talents of John Dick – who people may remember as the voice of “Sam” from the legendary Serious Sam FPS game. 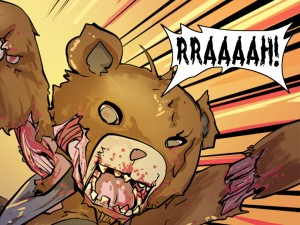 This is the second Kickstarter that Jeremy has run – his first for Illustrated Cyberpunk Novella: Metal Made Flesh finished at 489% funded – having secured its funding target in the first 3 days.

At 60 pages and a graphic novel in itself, Issue 6 marks the culmination of over 2 years’ work. From their launch with Issue Zero in May 2012 to the present, the series has continued to go from strength to strength due to a combination of Biggs’ offbeat writing style and Bakki’s brightly coloured, cute but gore filled artwork. In addition to the comics themselves, Jeremy is offering a horde of other goodies including their now infamous Zombie Teddy Bears, T-shirts and Necklaces.

Here’s what some of the reviewers had to say:

“One of the best Indie Comics I’ve read in years” – Adrian Mursec – Superrobotmayhem.com

“Bearlands riffs off The Walking Dead but it is this pure uncut honey, rather than the zombies, that leads the story after the initial scene setting of issue one, and the series is all the better for it…. enough of a twist to raise it above the seeming hordes of other zombie titles around at the moment” – Jeremy Briggs (no relation!) – downthetubes.net

“great, and gruesome… one of the most colourful and vibrant horror comics available right now! A great balance of light and dark, both in the artwork and in the writing (for a horror comic this is also one very funny book)!” – Phil Wheat – Nerdly.co.uk

“Biggs presents us with information but does not rest to let it sink in. Instead he throws us a curveball, and the reader is propelled along – not a single line is wasted.” – Alex Harris – Geek News Network

Please go to www.zombiebears.co.uk where you can watch the video, and subscribe for more details. Bearlands: Zombie Bears hits Kickstarter on 2nd September 2014.