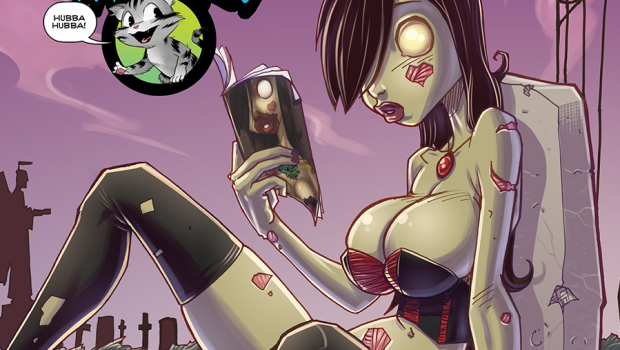 Action Lab, which primarily works with creator owned and creator-generated material, will be financing the production of Zombie Tramp, and relaunching the series with the May FCBD issue, and brand new number one of the ongoing series to follow that up starting in July.

Series creator Dan Mendoza will continue to write the series, while being joined by co-writer and editor, Jason Martin (Night of the 80’s Undead, Super Real), and future superstar artist TMChu. As we find our titular zombie-powered former call girl on the road, learning her budding abilities thanks to the newly acquired “book of the dead”. Janey starts out in Sin City, taking on the local sex trade and the elusive mastermind who controls Las Vegas from the shadows. The series will feature covers and interiors by talented newcomer TMChu, including nude variant covers, and variant covers by series creator Dan Mendoza.
The series begins it’s bold new direction in Action Lab: Danger Zone’s Free Comic Book Day offering, ZOMBIE TRAMP/EHMM THEORY, set to hit shelves on May 3, 2014. And you can follow Janey’s trademark mix of horror, kink, and supernatural mythology as she continues her path across the darker corners of society starting in July’s all new series debut!